Items related to Robert A. Heinlein: In Dialogue with His Century, Volume... 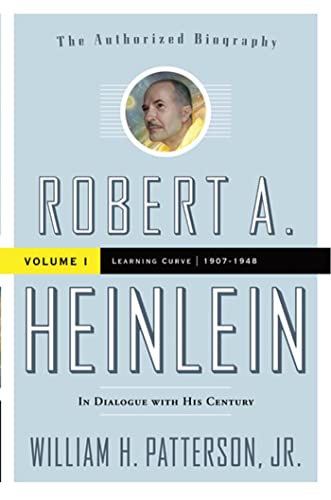 For the first time, the real story of the life of Robert A. Heinlein in the authorized biography

Robert A. Heinlein (1907-1988) is generally considered the greatest American SF writer of the 20th century. A famous and bestselling author in later life, he started as a navy man and graduate of Annapolis who was forced to retire because of tuberculosis. A socialist politician in the 1930s, he became one of the sources of Libertarian politics in the USA in his later years. His most famous works include the Future History series (stories and novels collected in The Past Through Tomorrow and continued in later novels), Starship Troopers, Stranger in a Strange Land, and The Moon is a Harsh Mistress.

Given his desire for privacy in the later decades of his life, he was both stranger and more interesting than one could ever have known. This is the first of two volumes of a major American biography. This volume is about Robert A. Heinlein's life up to the end of the 1940s and the mid-life crisis that changed him forever.

William H. Patterson, Jr., is an independent scholar who has published two books about Heinlein as well as numerous articles. He is an editor and contributor to the Virginia Edition Collected Works of Robert A. Heinlein. He lives in Los Angeles.

Robert A. Heinlein: In Dialogue with His Century, Volume 1: 1907-1948: Learning Curve (Paperback or Softback)

Robert A. Heinlein In Diaglogue With His Century : 1907-1948 Learning Curve

Robert A. Heinlein In Diaglogue With His Century

Shipping: US$ 17.16
From United Kingdom to U.S.A.
Destination, rates & speeds

Robert A Heinlein In Dialogue with His Century, Volume 1 19071948 Learning Curve