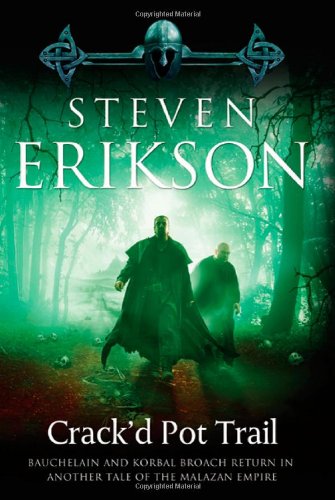 It is an undeniable truth: give evil a name and everyone's happy. Give it two names and...why, they're even happier.

Intrepid necromancers Bauchelain and Korbal Broach, scourges of civilization, raisers of the dead, reapers of the souls of the living, devourers of hope, betrayers of faith, slayers of the innocent, and modest personifications of evil, have a lot to answer for and answer they will. Known as the Nehemoth, they are pursued by countless self-professed defenders of decency, sanity, and civilization. After all, since when does evil thrive unchallenged? Well, often--but not this time.

Hot on their heels are the Nehemothanai, avowed hunters of Bauchelain and Korbal Broach. In the company of a gaggle of artists and pilgrims, stalwart Mortal Sword Tulgord Vise, pious Well Knight Arpo Relent, stern Huntsman Steck Marynd, and three of the redoubtable Chanter brothers (and their lone sister) find themselves faced with the cruelest of choices. The legendary Crack'd Pot Trail, a stretch of harsh wasteland between the Gates of Nowhere and the Shrine of the Indifferent God, has become a tortured path of deprivation.

Will honor, moral probity, and virtue prove champions in the face of brutal necessity? No, of course not. Don't be silly.

Steven Erikson is an archaeologist and anthropologist and a graduate of the Iowa Writers' Workshop. His Malazan Book of the Fallen series, including The Crippled God, Dust of Dreams, Toll the Hounds and Reaper's Gale, have met with widespread international acclaim and established him as a major voice in the world of fantasy fiction. The first book in the series, Gardens of the Moon, was shortlisted for a World Fantasy Award. The second novel, Deadhouse Gates, was voted one of the ten best fantasy novels of 2000 by SF Site. He lives in Canada.

“There will always be innocent victims in the pursuit of evil.”


The long years are behind me now. In fact, I have never been older. It comes to a man’s career when all of his cautions—all that he has held close and private for fear of damaging his reputation and his ambitions for advancement—all in a single moment lose their constraint. The moment I speak of, one might surmise, arrives the day—or more accurately, the first chime after midnight—when one realizes that further advancement is impossible. Indeed, that caution never did a thing to augment success, because success never came to pass. Resolved I may be that mine was a life gustily pursued, riches admirably attained and so forth, but the resolution is a murky one nonetheless. Failure wears many guises, and I have worn them all.
The sun’s gilded gift enlivens this airy repose, as I sit, an old man smelling of oil and ink, scratching with this worn quill whilst the garden whispers on all sides and the nightingales crouch mute on fruit-heavy branches. Oh, have I waited too long? Bones ache, twinges abound, my wives eye me from the shadows of the colonnade with black-tipped tongues poking out from painted mouth, and in the adjudicator’s office the water-clock dollops measured patience like the smacking of lips.
Well I recall the glories of the holy cities, when in disguise I knelt before veiled tyrants and god-kissed mendicants of the soul, and in the deserts beyond the crowded streets the leather-faced wanderers of the caravan tracks draw to the day’s end and the Gilk guards gather in shady oases and many a time I traveled among them, the adventurer none knew, the poet with the sharp eyes who earned his keep unraveling a thousand tales of ancient days—and days not so ancient, if only they knew.
They withheld nothing, my rapt listeners, for dwelling in a desert makes a man or woman a willing audience to all things be they natural or unnatural; while I, for all the wounds I delivered, for all the words of weeping and the joys and all the sorrows of love and death that passed my tongue, smooth as olives, sweetly grating as figs, I never let a single drop of blood. And the night would draw on, in laughter and tears and expostulations and fervent prayers for forgiveness (eyes ashine from my languid explorations of the paramour, the silk-drenched beds and the flash of full thigh and bosom) as if the spirits of the sand and the gods of the whirlwinds might flutter in shame and breathless shock—oh no, my friends, see them twist in envy!
My tales, let it be known, sweep the breadth of the world. I have sat with the Toblai in their mountain fastnesses, with the snows drifting to bury the peeks of the longhouses. I have stood on the high broken shores of the Perish, watching as a floundering ship struggled to reach shelter. I have walked the streets of Malaz City, beneath Mock’s brooding shadow, and set eyes upon the Deadhouse itself. Years alone assail a mortal wanderer, for the world is round and to witness it all is to journey without end.
But now see me in this refuge, cooled by the trickling fountain, and the tales I recount upon these crackling sheets of papyrus, they are the heavy fruits awaiting the weary traveler in yonder oasis. Feed then or perish. Life is but a search for gardens and gentle refuge, and here I sit waging the sweetest war, for I shall not die while a single tale remains to be told. Even the gods must wait spellbound.
Listen then, nightingale, and hold close and sure to your branch. Darkness abides. I am but a chronicler, occasional witness and teller of magical lies in which hide the purest truths. Heed me well, for in this particular tale I have my own memory, a garden riotous and overgrown yet, dare I be so bold, rich in its fecundity, from which I now spit these gleaming seeds. This is a story of the Nehemoth, and of their stern hunters, and too it is a tale of pilgrims and poets, and of me, Avas Didion Flicker, witness to it all.
There on the pilgrim route across the Great Dry, twenty-two days and twenty-three nights in a true season from the Gates of Nowhere to the Shrine of the Indifferent God, the pilgrim route known to all as Cracked Pot Trail. We begin with the wonder of chance that should gather in one place and at one time such a host of travelers, twenty-three days beyond the Gate. And too the curse of mischance, that the season was unruly and not at all true. Across the bleak wastes the wells were dry, the springs mired in foul mud. The camps of the Finders were abandoned, their hearth-ashes cold. Our twenty-third day, yet we still had far to go.
Chance for this gathering. Mischance for the straits these travelers now found themselves in. And the tale begins on this night, in a circle round a fire.
What is a circle but the mapping of each and every soul?