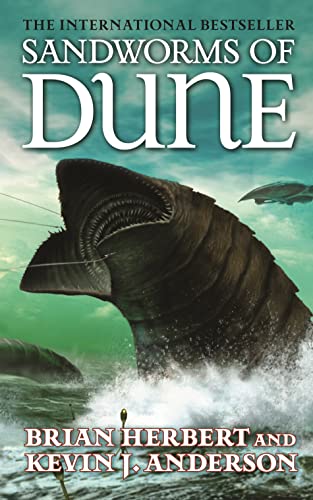 At the end of Frank Herbert's final novel, Chapterhouse: Dune, a ship carrying a crew of refugees escapes into the uncharted galaxy, fleeing from a terrifying, mysterious Enemy. The fugitives used genetic technology to revive key figures from Dune's past--including Paul Muad'Dib and Lady Jessica--to use their special talents to meet the challenges thrown at them.

Based directly on Frank Herbert's final outline, which lay hidden in two safe-deposit boxes for a decade, Sandworms of Dune will answer the urgent questions Dune fans have been debating for two decades: the origin of the Honored Matres, the tantalizing future of the planet Arrakis, the final revelation of the Kwisatz Haderach, and the resolution to the war between Man and Machine.

This breathtaking new novel in Frank Herbert's Dune series has enough surprises and plot twists to please even the most demanding reader.

Brian Herbert, the author of numerous novels and short stories, has been critically acclaimed by leading reviewers in the United States and around the world. The eldest son of science fiction superstar Frank Herbert, he, with Kevin J. Anderson, is the author of Hellhole and continues his father's beloved Dune series with books including The Winds of Dune and House Atreides, among other bestsellers. He also wrote a biography of his father, Dreamer of Dune. Herbert graduated from high school at age 16, and then attended U.C. Berkeley, where he earned a B.A. in Sociology. Besides an author, Herbert has been an editor, business manager, board game inventor, creative consultant for television and collectible card games, insurance agent, award-winning encyclopedia salesman, waiter, busboy, maid and a printer. He and his wife once owned a double-decker London bus, which they converted into an unusual gift shop. Herbert and his wife, Jan, have three daughters. They live in Washington state.

Sandworms of Dune (Paperback or Softback)