Items related to A Nameless Witch

Martinez, A. Lee A Nameless Witch 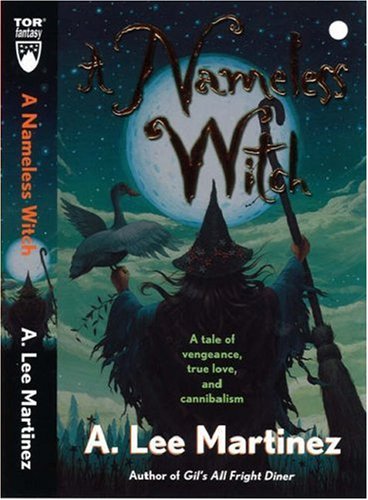 A tale of vengeance, true love, and cannibalism Being born undead can have its disadvantages, such as eternal youth and flawless beauty ---things most unsuitable for a witch. Hiding behind the guise of a grimy old crone, the witch is content living outside Fort Stalwart with her unlikely band of allies: a troll named Gwurm, an enchanted broom, and a demonic duck named Newt. She leads a simple life filled with spells, potions, and the occasional curse. So when a White Knight arrives at Fort Stalwart, the witch knows her days of peace are at an end. The Knight is just days in front of a horde of ravenous goblings, and Fort Stalwart lies right in the horde€™s path. But the goblings are just the first wave of danger, and soon the witch and the Knight must combine forces on a perilous quest to stop a mad sorcerer from destroying the world. Filled with menace, monsters, and magic, A Nameless Witc

A. Lee Martinez lives in Terrell, Texas. He is the award-winning author of Gil's All Fright Diner, In the Company of Ogres, A Nameless Witch, and The Automatic Detective.