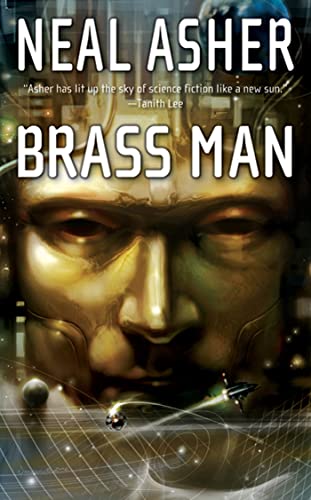 From the Philip K. Dick Award nominee author of Cowl, an adrenaline-powered new SF adventure: Brass Man. Neal Asher returns to his trademark Polity future setting, in a sequel to Gridlinked, which SFRevu.com called "brilliant and audacious work, chock-full of cutting-edge ideas."
Ian Cormac, a legendary Earth Central Security agent, the James Bond of a wealthy future, is hunting an interstellar dragon, little knowing that, far away, his competition has resurrected an horrific killing machine named "Mr. Crane" to assist in a similar hunt, ecompassing whole star systems. Mr. Crane, the insane indestructible artificial man now in a new metal body, seeks to escape a bloody past he can neither forget nor truly remember. And he is on a collision course with Ian Cormac.

Neal Asher's first novel was Gridlinked. He has since won acclaim for The Skinner, The Line of Polity, and Cowl. He lives in Chelmsord, Essex, England.