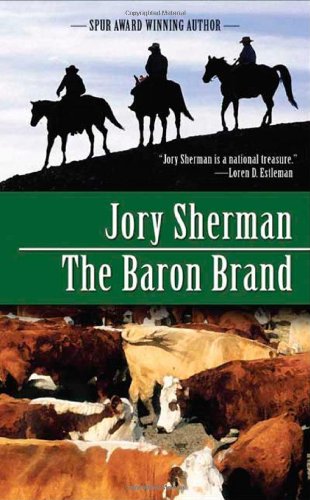 It is the eve of the Civil War, but the ranchers of the Rio Grande Valley are already fighting--amongst themselves and with the fierce Apaches. Martin Baron finds himself in battle against his own neighbor, Matteo Aguilar, and must fight daily to keep his family safe. Martin's proud and heart-sick son Anson, must leave leave all he knows and loves to head off an attack by an Apache chief against the ranch's settlers. But without his son at home to help protect the ranch, everything the Baron's have worked so hard to create is in danger of being destroyed.  The Baron Range is a story as rich as Texas itself, as the men and women struggle against all odds for wealth, power, and peace of mind in savage and uncertain world.

Jory Sherman is the Spur Award-winning author of Song of the Cheyenne and Medicine Horn, in addition to the Baron's saga. He is a real cowboy who rode the rodeo circuit. He lives on a lake in East Texas.