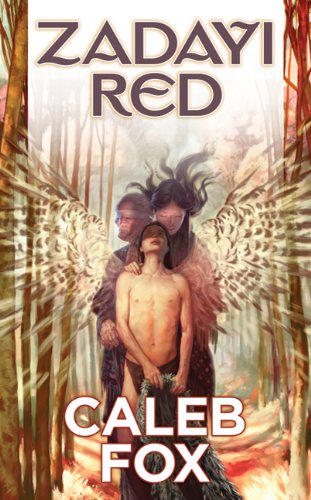 A compelling new voice in fantasy brings us a tale like no other in the genre.

A young Shaman of the Galayi people has had a powerful and frightening vision: it is of the Eagle Feather Cape, the gift of the Thunderbird, which is worn by the Seer of the People to see the future and gain the guidance of the gods.  The cape is torn and bloody, and it will no longer bring visions to the Seer of the People.  But the Shaman's vision also tells her of the cure:  a child will be born to the People, a hero who will restore the cape and return the goodwill of the gods to the People.

Dahzi may be that hero, if he can survive the hatred of his grandfather.  He was born after his mother’s death, as she fled from her father’s anger.  But Dahzi carries the hope of all of his People, along with the power to become a great Chief.  He will be tested--by his family, by his people, and by the Gods.

Zadayi Red is a magnificent retelling of a Cherokee legend. It brings to life an ancient people and a time of magic in a warm and intimate storyteller’s voice.

CALEB FOX has lived in many worlds.  Raised in Cherokee country, he received a scholarship from Columbia University and moved to New York.  Later he moved to Los Angeles where he wrote for newspapers, magazines and movies. Raised white and Christian, Fox was intrigued on a visit home to discover that his family was half Cherokee. He began to explore the great myths of Indian cultures. Today he lives in Indian country with his wife Sarita, walks a red spiritual path, plays music with friends, and travels in search of the big myths yearning to be reborn and told.