Items related to Halo: The Fall of Reach

Halo: The Fall of Reach 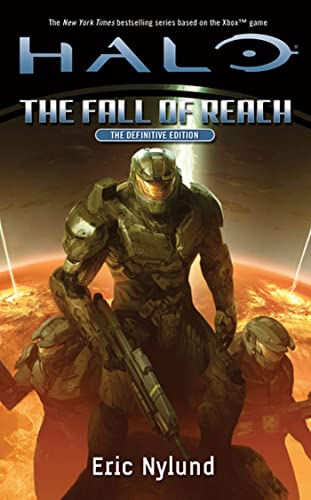 The Definitive Edition to the First and Bestselling Halo Novel, Including Twenty-seven Pages of New Material
***
Legends are not simply born...they are willed into existence.
Humanity has expanded beyond the Sol System. There are hundreds of planets we now call "home."
The United Nations Space Command now struggles to control this vast empire.
After exhausting all strategies to keep seething insurrections from exploding into interplanetary civil war, the UNSC has one last hope.
At the Office of Naval Intelligence, Dr. Catherine Halsey has been hard at work on a top secret program that could bring an end to all this conflict...and it starts with seventy-five children, among them a six year old boy named John.
Halsey never guessed that this little boy would become humanity's final hope against a vast alien force hell-bent on wiping us out.
This is the story of John, Spartan-117...the Master Chief, and of the battles that brought humanity face to face with its possible extinction.
***
This new Tor edition will serve as the definitive version of the novel that started Halo fans reading the series, and features brand-new material, including:
Excerpts of Office of Naval Intelligence interrogations of the Covenant.
Missives and mandates issued by the Covenant
Declassified transmissions regarding the defense of Reach
A personal insight into the Spartan program
The Official Evacuation Order for all inhabitants of Reach.
Five sketches of cover art by 343 Industries artist, Robogabo

As the bloody Human-Covenant War rages on Halo, the fate of humankind may rest with one warrior, the lone SPARTAN survivor of another legendary battle . . . the desperate, take-no-prisoners struggle that led humanity to Halo--the fall of the planet Reach. Now, brought to life for the first time, here is the full story of that glorious, doomed conflict.

While the brutal Covenant juggernaut sweeps inexorably through space, intent on wiping out humankind, only one stronghold remains--the planet Reach. Practically on Earth's doorstep, it is the last military fortress to defy the onslaught. But the personnel here have another, higher priority: to prevent the Covenant from discovering the location of Earth.

Outnumbered and outgunned, the soldiers seem to have little chance against the Covenant, but Reach holds a closely guarded secret. It is the training ground for the very first "super soldiers." Code-named SPARTANs, these highly advanced warriors, specially bioengineered and technologically augmented, are the best in the universe--quiet, professional, and deadly.

Now, as the ferocious Covenant attack begins, a handful of SPARTANs stand ready to wage ultimate war. They will kill, they will be destroyed, but they will never surrender. And at least one of them--the SPARTAN known as Master Chief--will live to fight another day on a mysterious and ancient, artificial world called Halo. . . .

Eric Nylund has written three novels based in the Halo video game universe: Halo: The Fall of Reach, Halo: First Strike, and Halo: Ghosts of Onyx, as well as the epic mythology incarnate series that begins with Mortal Coils and All That Lives Must Die. He lives near Seattle on a rain-drenched mountain with his wife, Syne Mitchell.