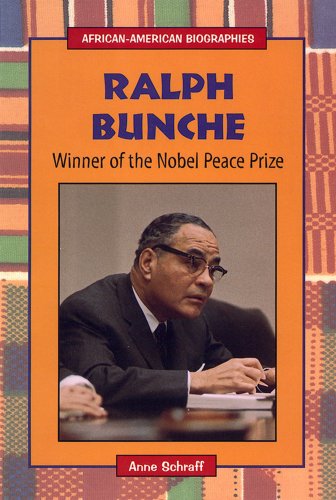 Discusses the personal and professional life of the statesman and diplomat who was one of the founders of the United Nations and who received the Nobel Prize for his peacemaking efforts.

Grade 6-9-This title begins with an account of the dramatic assassination in 1948 of Count Folke Bernadotte, the appointed U.N. mediator for Palestine. This event propelled Bunche into the world spotlight as a negotiator. For his work in achieving an armistice between Israel and its Arab neighbors, the statesman won the Nobel Peace Prize, becoming the first African American to receive this prestigious honor. The book covers his childhood, his student years at UCLA and Harvard, his professorship at Howard University, his later government service and diplomatic life, and his death in 1971. Average-quality black-and-white photos and several maps accompany the text. A solid introduction to a man who devoted his career to fighting war and intolerance.
Janet Woodward, Garfield High School, Seattle, WA
Copyright 1999 Reed Business Information, Inc.