Items related to Nelson Mandela and Apartheid in World History 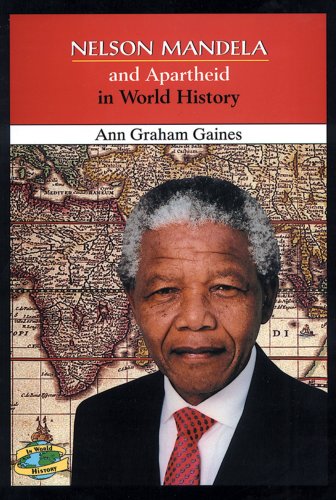 Examines the life of Nelson Mandela, from his days as an imprisoned freedom fighter to his role as president of South Africa, incorporating information about the history of South Africa and the effects of European colonization.

Gr. 5-9. Part of the In World History series, this biography does a fine job of integrating Mandela's personal story with an overview of early South African history and the rise and fall of apartheid. The style is clear and direct, with spacious layout and occasional black-and-white photos. Gaines ignores the controversy about whether President de Klerk deserved to share the Nobel Peace Prize with Mandela, but her sources are reliable (all fully documented in chapter notes at the back), and the facts are accurate (just one misspelling, Karrir War instead of Kaffir War). It's refreshing to get away from the idea of whites discovering South Africa; instead, the newcomers here are visitors and then settlers. While the focus is on the heroic leader, readers will come away with some sense of daily life under apartheid and the struggle to change it. They will also want to find out more about some of the other leaders Gaines mentions, including Steve Biko, Walter Sisulu, and Oliver Tambo, all of whom played crucial roles in the fight against racism. Hazel Rochman
Copyright © American Library Association. All rights reserved