Items related to Somewhere: The Life of Jerome Robbins

Somewhere: The Life of Jerome Robbins 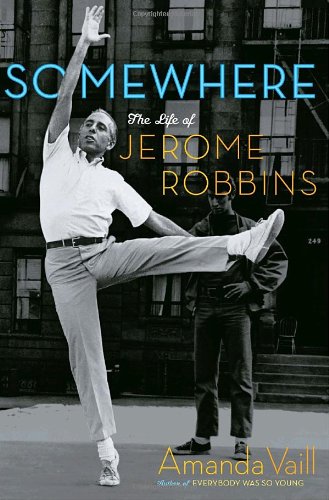 From the author of the acclaimed Everybody Was So Young, the definitive and major biography of the great choreographer and Broadway legend Jerome Robbins

To some, Jerome Robbins was a demanding perfectionist, a driven taskmaster, a theatrical visionary; to others, he was a loyal friend, a supportive mentor, a generous and entertaining companion and colleague. Born Jerome Rabinowitz in New York City in 1918, Jerome Robbins repudiated his Jewish roots along with his name only to reclaim them with his triumphant staging of Fiddler on the Roof. A self-proclaimed homosexual, he had romances or relationships with both men and women, some famous—like Montgomery Clift and Natalie Wood—some less so. A resolutely unpolitical man, he was forced to testify before Congress at the height of anti-Communist hysteria. A consummate entertainer, he could be paralyzed by shyness; nearly infallible professionally, he was conflicted, vulnerable, and torn by self-doubt. Guarded and adamantly private, he was an inveterate and painfully honest journal writer who confided his innermost thoughts and aspirations to a remarkable series of diaries and memoirs. With ballets like Dances at a Gathering, Afternoon of a Faun, and The Concert, he humanized neoclassical dance; with musicals like On the Town, Gypsy, and West Side Story, he changed the face of theater in America.
In the pages of this definitive biography, Amanda Vaill takes full measure of the complicated, contradictory genius who was Jerome Robbins. She re-creates his childhood as the only son of Russian Jewish immigrants; his apprenticeship as a dancer and Broadway chorus gypsy; his explosion into prominence at the age of twenty-five with the ballet Fancy Free and its Broadway incarnation, On the Town; and his years of creative dominance in both theater and dance. She brings to life his colleagues and friends—from Leonard Bernstein and George Balanchine to Robert Wilson and Robert Graves—and his loves and lovers. And she tells the full story behind some of Robbins’s most difficult episodes, such as his testimony before the House Un-American Activities Committee and his firing from the film version of West Side Story.
Drawing on thousands of pages of documents from Robbins’s personal and professional papers, to which she was granted unfettered access, as well as on other archives and hundreds of interviews, Somewhere is a riveting narrative of a life lived onstage, offstage, and backstage. It is also an accomplished work of criticism and social history that chronicles one man’s phenomenal career and places it squarely in the cultural ferment of a time when New York City was truly “a helluva town.”

Jerome Robbins (born Jerome Rabinowitz in 1918) was one of the most important figures in American dance and musical theater in the twentieth century. He was the Co-Artistic Director with George Balanchine of the fledgling New York City Ballet in 1948, bringing Broadway vernacular energy to complement Balanchine's austere classicism and choreographing such classic ballets as Facsimile, Dance at a Gathering, and Afternoon of a Faun. His ballet to a score by Leonard Bernstein, Fancy Free, electrified the dance world and would transmogrify into the immortal musical On the Town. On Broadway, he choreographed The King and I, The Pajama Game, Bells Are Ringing, and Peter Pan, and choreographed and directed West Side Story?probably his most enduring achievement. In his private life he was an ambivalent, semi-closeted homosexual and his cooperation with the McCarthy committee during the witch-hunts of the 1950s estranged him from many of his closest friends. He was an artistic giant whose life embodied many of the tensions and contradictions of the American century. He exemplified, in his life no less than his work, the flowering of American in the mid-twentieth century -in particular the emergence of New York as the capital of world culture.

Somewhere by Amanda Vaill is being written with full access to the Robbins papers, a voluminous collection of letters, diaries, notebooks, memos, and production notes that form an unrivaled archive of a singular man's life and a singular moment in our cultural history. Supremely accomplished and entertaining, it not only chronicles Robbins's phenomenal career and plumbs his complex private life but will place him squarely in the cultural ferment of his time and his native city. It explains the tangle of contradictions that made him such an infuriating, fascinating, oddly vulnerable human being and such a protean creative figure, and offers a densely populated narrative that will draw readers in and along. Somewhere is a major biography of a true entertainment legend.

AMANDA VAILL is the author of Everybody Was So Young, the bestselling biography of Lost Generation icons Gerald and Sara Murphy, which was nominated for a National Book Critics Circle Award. A publisher and editor for more than twenty years, she has written on arts and culture for New York, Esquire, Ballet Review, Architectural Digest, Town & Country, and other publications. She lives in New York City.

1. Somewhere: The Life of Jerome Robbins

2. Somewhere: The Life of Jerome Robbins

3. Somewhere: The Life of Jerome Robbins

4. Somewhere: The Life of Jerome Robbins

5. Somewhere: The Life of Jerome Robbins