Items related to The Upper Zoo: A Novel

The Upper Zoo: A Novel 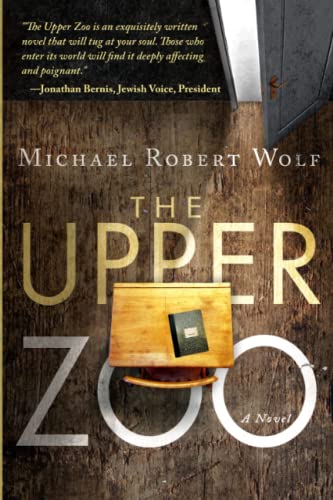 “A slice of life from the 1960s. You will not be able to put this refreshingly entertaining book down.” — Sid Roth, Host, It's Supernatural! Television

The Upper Zoo tells a story that has not yet been told; that of a twelve year old Jewish boy in the 1960s who is impacted by the life and love of an autistic child with a firm commitment to Jesus. After being placed in a class for under-achievers, Jonathan finds his life changed forever. The book takes an unusual approach, revealing a world of dysfunctional pain and spiritual triumph through the eyes of a twelve-year old boy. Through surprising twists and turns, Jonathan uncovers secrets that will drastically affect his life and the lives of those closest to him.

No one who reads The Upper Zoo will be able to put it down—it is an inspirational and poignant novel.

Michael Robert Wolf was born and raised in Philadelphia,Pennsylvania. In 1976, he graduated magna cum laude in Englishandliterature from Temple University. Eventually, he moved to Cincinnatitoserve in ministry related activities. In addition to his involvementinMessianic Jewish community work, Wolf is an avid writer of books,plays, andscreenplays. His latest book, The Linotype Operator, ispublished by FinishingLine Press, and will be released in June of 2016.New York Times number one andOprah selection author Jacqueline Mitchardhas written about The LinotypeOperator, "It enchanted me in a a way I've been enchanted by only ahandful of stories over the last ten years.When I finished it, I wanted toread it all over again." He also wrotethe novel The Upper Zoo, publishedin 2012 by Destiny Image, which roseto number three across all genres atAmazon.com. In addition, he wroteand directed the film The Sound of theSpirit--also released in2012--which consistently hovers around 8.0 on theInternet MovieDatabase, and has been shown several times on various televisionnetworks around the world. He currently lives in Cincinnati with his wifeRachel, an author and editor of NorthLight art books.

“A slice of life from the 1960s. You will not be able to put this refreshingly entertaining book down.” —Sid Roth, “It’s Supernatural” TV host

“The Upper Zoo is an exquisitely written novel that will tug at your soul. Those who enter its world will find it deeply affecting and poignant.” -- Jonathan Bernis, Jewish Voice Ministries

Book Description Paperback. Condition: New. Paperback. "Discover the Truth" There are many kinds of "smart" and many kinds of "wise." "The Upper Zoo" tells a story of a twelve year old Jewish boy in the .Shipping may be from multiple locations in the US or from the UK, depending on stock availability. 268 pages. 0.363. Seller Inventory # 9780768440980