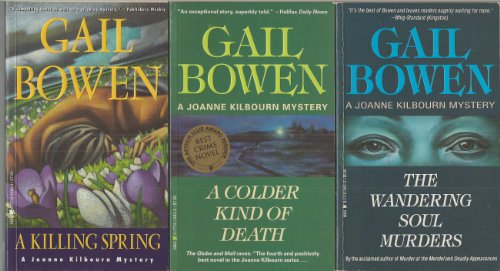 Murder is the last thing on Joanne Kilbourn’s mind on a perfect morning in May. Then the phone rings, and she learns that her daughter Mieka has found the corpse of a young woman in an alley near her store. So begins Joanne’s chilling collision with evil in Gail Bowen’s riveting third mystery, The Wandering Soul Murders.

Joanne is stunned and saddened by the news that the dead woman, at seventeen, was already a veteran of the streets. When, just twenty-four hours later, her son’s girlfriend is found dead, drowned in a lake in Saskatchewan’s Qu’Appelle Valley, Joanne’s sunny world is shattered. Her excitement about Mieka’s upcoming marriage, her involvement in the biography she is writing, even her pleasure at her return to Regina all fade as she finds herself drawn into a twilight world where money can buy anything and there are always people willing to pay.

“With her rare talent for plumbing emotional pain, Bowen makes you feel the shock of murder.”
–Kirkus Reviews

“Bowen...pulls her complicated story together around a shocking and all-too-realistic secret....Her best book to date.”
–Globe and Mail

With her Joanne Kilbourn mystery series, Gail Bowen has become “a name to reckon with in Canadian mystery letters” (Edmonton Journal). The first book in the series, Deadly Appearances, which was published in 1990, was nominated for the W.H. Smith-Books in Canada award for best first novel. It was followed by Murder at the Mendel (1991), The Wandering Soul Murders (1992), A Colder Kind of Death (which won the Arthur Ellis Award for best crime novel of 1995), and A Killing Spring (1996). Gail Bowen is also head of the English Department at the First Nations University of Canada.
From the Hardcover edition.

Book Description McClelland & Stewart. Mass Market Paperback. Condition: Good. A copy that has been read, but remains in clean condition. All pages are intact, and the cover is intact. The spine may show signs of wear. Pages can include limited notes and highlighting, and the copy can include previous owner inscriptions. At ThriftBooks, our motto is: Read More, Spend Less. Seller Inventory # G0771014813I3N00

Book Description McClelland & Stewart Ltd, Westminster, Maryland, U.S.A., 1993. Mass Market Paperback. Condition: Very Good +. Please email us if you would like further information or if you would like us to send you a picture of the book. Thanks for looking! Size: 16mo - over 5ľ" - 6ľ" tall. Seller Inventory # 011809

7. A Colder Kind Of Death, A Killing Spring, The Wandering Soul Murders