Items related to When We Were Very Young

Milne, A. A. When We Were Very Young

When We Were Very Young 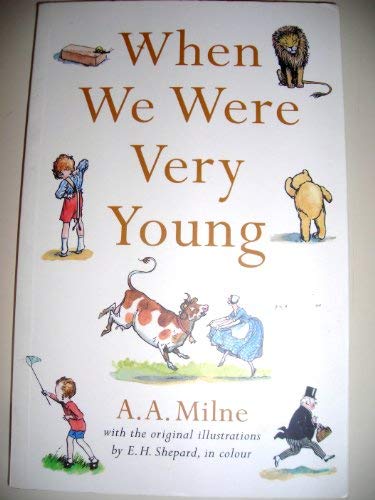 A.A. Milne's writing reaches the hearts of readers of all ages. His poems weave together the worlds of reality and enchanting make-believe. And they are paired perfectly with Ernest H. Shepard's whimsical illustrations.

In all likelihood, your mother or father read you these poems and remember their parents reading the same. This collection of poetry by the creator of Winnie the Pooh was first published in 1924. With its companion volume Now We Are Six, the little books became two of the biggest bestsellers in publishing history. Children all over the world have heard about changing the guard at Buckingham Palace; James James Morrison Morrison Weather by George Dupree; the three little foxes who kept their handkerchiefs in cardboard boxes; and, of course, Christopher Robin, named for A.A. Milne's son. Adults and older children will enjoy Milne's poems too, as some of his humor is subtly directed at a more sophisticated audience. But younger children are the ones who love the naughty Mary Jane (lovely rice pudding again?) and the bears on the corners of London's streets. Read these poems aloud and pass along (or start) a family tradition. (Ages 5 to 9)

A.A. Milne grew up in a school - his parents ran Henley House in Kilburn, for young boys - but never intended to be a children's writer. Pooh he saw as a pleasant sideline to his main career as a playwright and regular scribe for the satirical literary magazine, Punch. Writing was very much the dominant feature of A.A. (Alan Alexander)'s life. He joined the staff of Punch in 1906, and became Assistant Editor. In the course of two decades he fought in the First World War, wrote some 18 plays and three novels, and fathered a son, Christopher Robin Milne, in 1920 (although he described the baby as being more his wife's work than his own!). Observations of little Christopher led Milne to produce a book of children's poetry, When We Were Very Young, in 1924, and in 1926 the seminal Winnie-the-Pooh. More poems followed in Now We Are Six (1927) and Pooh returned in The House at Pooh Corner (1928). After that, in spite of enthusiastic demand, Milne declined to write any more children's stories as he felt that, with his son growing up, they would now only be copies based on a memory. In one way, Christopher Robin turned out to be more famous than his father, though he became uncomfortable with his fame as he got older, preferring to avoid the literary limelight and run a bookshop in Dartmouth. Nevertheless, he published three volumes of his reminiscences before his death in 1996.