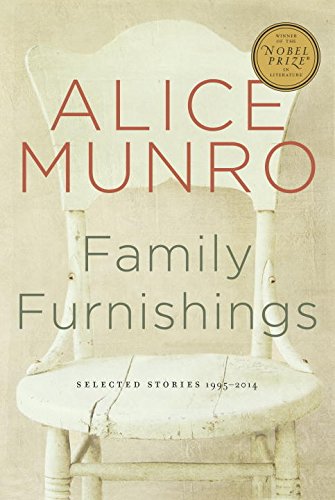 From the recipient of the 2013 Nobel Prize in Literature -- perhaps our most beloved author -- a new selection of her peerless short fiction, gathered from the collections of the last two decades, a companion volume to Selected Stories (1968-1994).

By all accounts, no Nobel Prize in recent years has garnered the enthusiastic reception that Alice Munro's has, and in its wake, her reputation and readership has skyrocketed worldwide. Now, Family Furnishings will bring us twenty-five of her most accomplished, most powerfully affecting stories, most of them set in the territory she has so brilliantly made her own: the small towns and flatlands of southwestern Ontario. Subtly honed with the author's hallmark precision, grace, and compassion, these stories illuminate the ordinary but quite extraordinary particularity in the lives of men, women, and children as they discover sex, fall in love, part, quarrel, head out into the unknown, suffer defeat, and find a way to be in the world.

As the Nobel Prize presentation speech reads in part: "Reading one of Alice Munro's texts is like watching a cat walk across a laid dinner table. A brief short story can often cover decades, summarizing a life, as she moves deftly between different periods. No wonder Alice Munro is often able to say more in thirty pages than an ordinary novelist is capable of in three hundred. She is a virtuoso of the elliptical and...the master of the contemporary short story."

Alice Munro grew up in Wingham, Ontario, and attended the University of Western Ontario. She has published thirteen collections of stories and a novel. During her distinguished career she has been the recipient of many awards, including two Giller Prizes, the National Book Critics Circle Award, and the Man Booker International Prize. In 2013 she was awarded the Nobel Prize for Literature. Her stories have appeared in The New Yorker, Atlantic Monthly, Harper’s Magazine, The Paris Review, Granta, and many other publications, and her collections have been translated into thirteen languages. She lives in Port Hope, Canada, on Lake Ontario.

Many persons who have not studied mathematics confuse it with arithmetic and consider it a dry and arid science. Actually, however, this science requires great fantasy.
—Sophia Kovalevsky

On the first day of January, in the year 1891, a small woman and a large man are walking in the Old Cemetery, in Genoa. Both of them are around forty years old. The woman has a childishly large head, with a thicket of dark curls, and her expression is eager, faintly pleading. Her face has begun to look worn. The man is immense. He weighs 285 pounds, distributed over a large frame, and being Russian, he is often referred to as a bear, also as a Cossack. At present he is crouching over tombstones and writing in his notebook, collecting inscriptions and puzzling over abbreviations not immediately clear to him, though he speaks Russian, French, English, Italian, and has an under- standing of classical and medieval Latin. His knowledge is as expansive as his physique, and though his speciality is governmental law, he is capable of lecturing on the growth of contemporary political institutions in America, the peculiarities of society in Russia and the West, and the laws and practices of ancient empires. But he is not a pedant. He is witty and popular, at ease on various levels, and able to live a most comfortable life, due to his properties near Kharkov. He has, however, been forbidden to hold an academic post in Russia, because of being a Liberal.

The woman with him is also a Kovalevsky. She was married to a distant cousin of his, but is now a widow.

She speaks to him teasingly.

Only half listening, he asks her, Why is that?

“Because we have gone walking in a graveyard on the first day of the New
Year.”

“There are still a few things you don’t know,” she says in her pert but anxious way. “I knew that before I was eight years old.”

“Girls spend more time with kitchen maids and boys in the stables—I sup- pose that is why.”

“Boys in the stables do not hear about death?”

“Not so much. Concentration is on other things.”

There is snow that day but it is soft. They leave melted, black footprints
where they’ve walked.

She met him for the first time in 1888. He had come to Stockholm to advise on the foundation of a school of social sciences. Their shared nationality, going so far as a shared family name, would have thrown them together even if there was no particular attraction. She would have had a responsibility to entertain and generally take care of a fellow Liberal, unwelcome at home.

But that turned out to be no duty at all. They flew at each other as if they had indeed been long-lost relatives. A torrent of jokes and questions followed, an immediate understanding, a rich gabble of Russian, as if the languages of Western Europe had been flimsy formal cages in which they had been too long confined, or paltry substitutes for true human speech. Their behavior, as well, soon overflowed the proprieties of Stockholm. He stayed late at her apartment. She went alone to lunch with him at his hotel. When he hurt his leg in a mishap on the ice, she helped him with the soaking and dressing and, what was more, she told people about it. She was so sure of herself then, and especially sure of him. She wrote a description of him to a friend, borrowing from De Musset.

And at the end she wrote, “A real Russian, he is, into the bargain.”

Fat Maksim, she called him then.

“I have never been so tempted to write romances, as when with Fat
Maksim.”

And “He takes up too much room, on the divan and in one’s mind. It is simply impossible for me, in his presence, to think of anything but him.”

This was at the very time when she should have been working day and night, preparing her submission for the Bordin Prize. “I am neglecting not only my Functions but my Elliptic Integrals and my Rigid Body,” she joked to her fellow mathematician, Mittag-Leffler, who persuaded Maksim that it was time to go and deliver lectures in Uppsala for a while. She tore herself from thoughts of him, from daydreams, back to the movement of rigid bodies and the solution of the so-called mermaid problem by the use of theta functions with two independent variables. She worked desperately but happily, because he was still in the back of her mind. When he returned she was worn out but triumphant. Two triumphs—her paper ready for its last polishing and anonymous submission; her lover growling but cheerful, eagerly returned from his banishment and giving every indication, as she thought, that he intended to make her the woman of his life.


Excerpted from Family Furnishings by Alice Munro. Copyright © 2014 by Alice Munro. Excerpted by permission of Alfred A. Knopf, a division of Random House LLC. All rights reserved. No part of this excerpt may be reproduced or reprinted without permission in writing from the publisher.