Items related to Kennedy and Diefenbaker: The Feud that Helped Topple...

Nash, Knowlton Kennedy and Diefenbaker: The Feud that Helped Topple a Government

Kennedy and Diefenbaker: The Feud that Helped Topple a Government 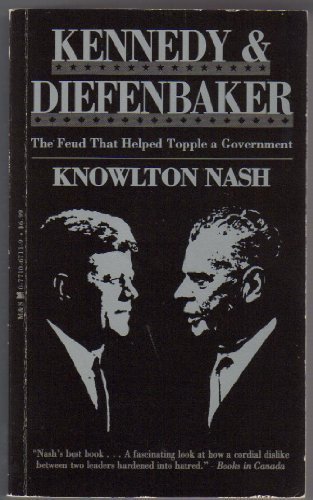 In his early years as a journalist Knowlton Nash worked with the Globe and Mail, United Press, and, as a freelancer, the Financial Post, Maclean’s, the Vancouver Sun, and the Windsor Star, among other Canadian news outlets. He covered stories around the world, including the Cuban missile crisis, the student riots in Paris in 1968, and the Vietnam War, and interviewed various Canadian prime ministers and American presidents. In 1969 Nash was made director of information programming at the CBC, and in the mid-1970s, he became its director of television news and current affairs, a position he held until becoming anchor and senior correspondent for “The National” in 1978. In 1988, he stepped down as anchor, although he remained as senior correspondent until 1992, when he retired from daily television news broadcasting. Today, he is host of the CBC documentary series “Witness” and the archival program “Sense of History,” as well as anchor of “News in Review,” an educational series produced for schools and libraries.

Nash is also well known as the author of seven previous acclaimed books, including Cue the Elephant, Prime Time at Ten, Kennedy and Diefenbaker, The Microphone Wars, Trivia Pursuit, and The Swashbucklers. In 1989, he was made an Officer of the Order of Canada, in 1995 he was given the John Drainie Award for his significant contribution to broadcasting, in 1996 he was named to the Canadian News Hall of Fame, and was made a Member of the Order of Ontario in 1998. Knowlton Nash lives in Toronto with his wife, Lorraine Thomson.

1. Kennedy and Diefenbaker: The Feud that Helped Topple a Government Nash, Knowlton