Ross, Sinclair As for Me and My House (New Canadian Library)

As for Me and My House (New Canadian Library) 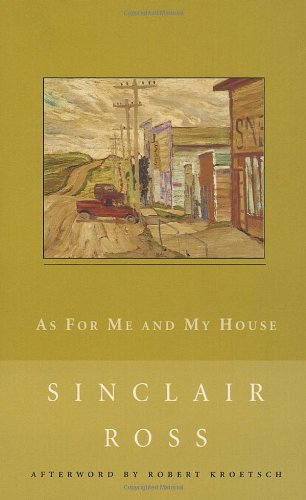 “It’s an immense night out there, wheeling and windy. The lights on the street and in the houses against the black wetness, little unilluminating glints that might be painted on it. The town seems huddled together, cowering on a high tiny perch, afraid to move lest it topple into the wind.”

The town is Horizon, the setting of Sinclair Ross’ brilliant classic study of life in the Depression era. Hailed by critics as one of Canada’s great novels, As For Me and My House takes the form of a journal. The unnamed diarist, one of the most complex and arresting characters in contemporary fiction, explores the bittersweet nature of human relationships, of the unspoken bonds that tie people together, and the undercurrents of feeling that often tear them apart. Her chronicle creates an intense atmosphere, rich with observed detail and natural imagery.

As For Me and My House is a landmark work. It is essential reading for anyone who seeks to understand the scope and power of the Canadian novel.

Sinclair Ross was born on a homestead near Shelbrooke in northern Saskatchewan in 1908. He dropped out of school after grade eleven to work in a bank. After working in many small-town banks in Saskatchewan, he transferred to a bank in Winnipeg in 1933. In 1941 he published his first novel, As For Me and My House, with its evocation of prairie life during the Depression. The prairie is the major setting for his two collections of short fiction, The Lamp at Noon and Other Stories and The Race and Other Stories.

From 1942 until 1946 Ross served with the Canadian army in London, England. In 1946 he returned briefly to Winnipeg before settling in Montreal, where he continued in banking until his retirement in 1968.

Ross’ later novels, The Well, Whir of Gold, and Sawbones Memorial, continue his exploration of prairie life and its power to challenge as well as sustain its inhabitants.

Upon his retirement Ross lived in Greece and then in Spain. He returned to Montreal in 1980, and two years later moved to Vancouver.

Sinclair Ross died in Vancouver in 1996.

Philip has thrown himself across the bed and fallen asleep, his clothes on still, one of his long legs dangling to the floor. . . .

He looks old and worn-out tonight; and as I stood over him a little while ago his face brought home to me how he shrinks from another town, how tired he is, and heartsick of it all. I ran my fingers through his hair, then stooped and kissed him. Lightly, for that is of all things what I mustn’t do, let him ever suspect me of being sorry. He’s a very adult, selfsufficient man, who can’t bear to be fussed or worried over; and sometimes, broodless old woman that I am, I get impatient being just his wife, and start in trying to mother him too.

His sermon for tomorrow is spread out on the little table by the bed, the text that he always uses for his first Sunday. As For Me and My House We Will Serve the Lord. It’s a stalwart, four-square, Christian sermon. It nails his colors to the mast. It declares to the town his creed, lets them know what they may expect. The Word of God as revealed in Holy Writ — Christ Crucified — salvation through His Grace — those are the things that Philip stands for.

And as usual he’s been drawing again. I turned over the top sheet, and sure enough on the back of it there was a little Main Street sketched. It’s like all the rest, a single row of smug, false-fronted stores, a loiterer or two, in the distance the prairie again. And like all the rest there’s something about it that hurts. False fronts ought to be laughed at, never understood or pitied. They’re such outlandish things, the front of a store built up to look like a second storey. They ought always to be seen that way, pretentious, ridiculous, never as Philip sees them, stricken with a look of self-awareness and futility.

That’s Philip, though, what I must recognize and acknowledge as the artist in him. Sermon and drawing together, they’re a kind of symbol, a summing up. The smalltown preacher and the artist — what he is and what he nearly was — the failure, the compromise, the going-on — it’s all there — the discrepancy between the man and the little niche that holds him.

And that hurt too, made me slip away furtively and stand a minute looking at the dull bare walls, my shoulders drawn up round my ears to resist their cold damp stillness. And huddling there I wished for a son again, a son that I might give back a little of what I’ve taken from him, that I might at least believe I haven’t altogether wasted him, only postponed to another generation his fulfillment. A foolish, sentimental wish that I ought to have outgrown years ago — that drove me outside at last, to stand on the doorstep shivering, my lips locked, a spatter of rain in my face.

It’s an immense night out there, wheeling and windy. The lights on the street and in the houses are helpless against the black wetness, little unilluminating glints that might be painted on it. The town seems huddled together, cowering on a high, tiny perch, afraid to move lest it topple into the wind. Close to the parsonage is the church, black even against the darkness, towering ominously up through the night and merging with it. There’s a soft steady swish of rain on the roof, and a gurgle of eavestroughs running over. Above, in the high cold night, the wind goes swinging past, indifferent, liplessly mournful. It frightens me, makes me feel lost, dropped on this little perch of town and abandoned. I wish Philip would waken.
From the Trade Paperback edition.

1. As for Me and My House (New Canadian Library)

2. As for Me and My House (New Canadian Library) Ross, Sinclair and Kroetsch, Robert

3. As for Me and My House (New Canadian Library) Ross, Sinclair and Kroetsch, Robert