Items related to Critical Images: The Canonization of Don Quixote through...

Schmidt, Rachel Critical Images: The Canonization of Don Quixote through Illustrated Editions of the Eighteenth Century

Critical Images: The Canonization of Don Quixote through Illustrated Editions of the Eighteenth Century 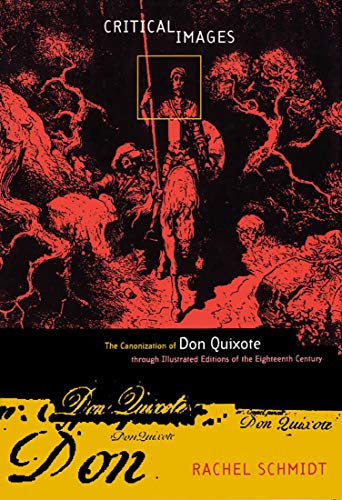 How did the tall, lanky Don Quixote and the short, stout Sancho Panza become staple figures of Western iconography, so well known that their silhouettes are easily recognizable in Picasso's famous work? How did the novel Don Quixote, a parody of the romances of knight errantry, become a paean to the long-suffering, impotent nobility of its deluded protagonist? According to Rachel Schmidt, the answers to both questions are to be found in the way in which the novel's characters and episodes were depicted in early illustrated editions. In Critical Images Schmidt argues that these visual images presented critical interpretations that both formed and represented the novel's historical reception. Schmidt analyses both Spanish and English illustrations, including those by William Hogarth, John Vanderbank, Francis Hayman, José del Castillo, and Francisco de Goya y Lucientes, and explores several of the iconographic traditions present in the illustrations: the burlesque, which focuses on the work's slapstick humour; the satirical, which emphasizes Cervantes's supposed didactic, Enlightenment message; and the sentimental, which highlights Don Quixote's purity of heart and purpose. Schmidt demonstrates that the illustrations offset the neoclassical criticism contained in the same volumes and reveals an intriguing variety of historical readings, highlighting the debates, controversies, and conflicts of interests surrounding interpretations of Don Quixote. Dealing with such topical issues as canon formation, visual semiotics, and the impact of visual media on public opinion, Critical Images will be of great value not only to literary scholars and literary historians but also to art historians and those engaged in cultural and media studies.

Rachel Schmidt is assistant professor of Spanish, University of Calgary.

"Schmidt skilfully applies the tools of art history, history of ideas, and reception theory to explore how illustrations in eighteenth-century English and Spanish editions of Don Quixote both reflected and influenced changing interpretations of Cervantes's masterpiece. Critical Images is very interesting and thoroughly researched, and Schmidt's comments on the illustrations are highly perceptive. I enthusiastically recommend it." Michael McGaha, Department of Hispanic Studies, Pomona College

2. Critical Images: The Canonization of Don Quixote through Illustrated Editions of the Eighteenth Century

3. Critical Images: The Canonization of Don Quixote Through Illustrated Editions of the Eighteenth Century