Madden, Kyla Forkhill Protestants and Forkhill Catholics, 1787-1858 (Volume 33) (McGill-Queen’s Studies in the Hist of Re)

Forkhill Protestants and Forkhill Catholics, 1787-1858 (Volume 33) (McGill-Queen’s Studies in the Hist of Re) 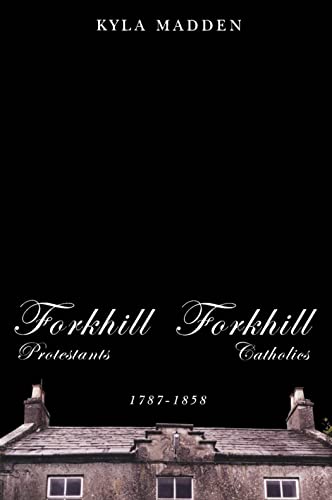 In the late eighteenth century, an influx of Protestant settlers to the mainly Catholic parish of Forkhill on the Ulster borderlands provoked clashes between natives and newcomers. None was more horrific than the brutal attack on a Protestant schoolmaster and his family in the winter of 1791. The conflict was immediately cast in sectarian terms, leading to more than 200 years of ill-will. But was it a misdiagnosis? Forkhill Protestants and Forkhill Catholics explores the social history of the parish between 1787 and 1858. In a wide-ranging analysis, Kyla Madden demonstrates that there was a greater degree of cooperation and exchange between Catholics and Protestants than the historical record has acknowledged. Madden contends that since some of our widely held assumptions about the patterns of Irish history dissolve under scrutiny at the local level, they should be more cautiously applied on a larger scale.

An excellent work, written with flair. -- Marianne Elliott * Institute of IrishStudies, University of Liverpool * A jarring corrective to generations of scholars and pundits wedded to the notion that "sectarianism" is at the heart of understanding social, cultural, and political Ulster. -- Mark McGowan * St Michael's College, University of Toronto * This study is a notable addition to a growing corpus of Irish local and regional studies. Within its modern length she has made an elegant and perceptive addition to our understand of Ireland's past. Her fine study provides fascinating insights into a complex community undergoing profound changes. * Familia: Ulster Geneological Review, Number 23 *

3. Forkhill Protestants and Forkhill Catholics 1787 - 1858 (Mcgill-Queens Studies in the History of Religion)