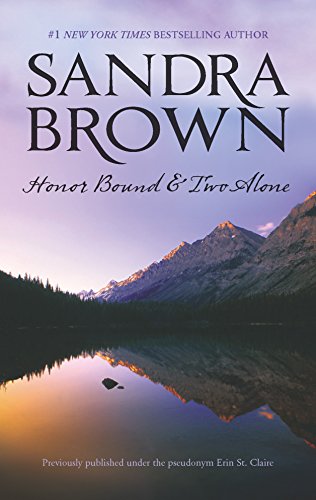 Escaped convict Lucas Greywolf will do whatever it takes to get back to his reservation home, honor bound to pay last respects to his dying grandfather—even if that means taking Aislinn Andrews hostage.

Aislinn is alternately intrigued and infuriated by this misunderstood man who's made no secret of his desire for her—or of his contempt for her kind, the Anglos who betrayed his community. Yet among his people, Aislinn sees another side to Lucas. Once her captor, he is now the man she desires—the man she's beginning to love....

When a plane crash strands her in the remote reaches of the north, confident businesswoman Rusty Carlson is hurt and alone with a man she fears. But she will surely die without the help of Vietnam vet Cooper Landry.

Cooper has a deep-rooted grudge against beautiful women like Rusty, but he'll be damned if he'll let her risk his chance for survival. There are predators in the dense woods and the odds are against the pair. But what Rusty and Cooper are even less prepared for is the discovery that they desire more than just survival....

Brown began her writing career in 1981 and since then has published over seventy novels, most of which remain in print. As of 1990, when Mirror Image made The New York Times bestseller list, each subsequent novel, including reprints of earlier books, have become Times bestsellers.
Sandra and her husband Michael Brown live in Arlington, Tx.

The refrigerator door was open, projecting a pale, blue-white wedge of light into the dark kitchen. A carton of milk was standing on the countertop. Beside it was a loaf of bread, gaping open, two slices lying half in, half out.

But even without those peculiarities, she instinctively knew the moment she came through her back door that something was amiss. She sensed another presence, dangerous and motionless, waiting.

Automatically she reached for the light switch.

Before her hand made contact, it was manacled by iron-hard fingers, twisted behind her and painfully shoved up between her shoulder blades. She opened her mouth to scream, but another hand, callused and tasting slightly of salt, clamped over her mouth, so that her scream came out only as a frantic, guttural sound, that of an animal entrapped.

She had always wondered how she would react in such a situation. If assaulted, would she faint? If her life were imperiled by an attacker, would she plead to be spared?

It came as a mild surprise, now, that besides being frightened she was angry. She began to struggle, trying to twist her head away from the unyielding hand over her mouth. She wanted to see her assailant's face. Get a description. Wasn't that what the rape-prevention centers advised? Look at his face.

Easier said than done, she realized. Struggling proved to be futile because of her attacker's strength. He was tall. That much she knew. She could feel his breath, ragged and hot, against the crown of her head. Occasionally her head bumped into his chin. So he must be well over six feet tall, she reasoned, and filed that bit of information away.

The body she was being held against was hard, but she wouldn't use "bulky" or "muscle-bound" in her description to the police. Indeed, it seemed to her that he was whipcord lean. From the corner of her eye, his biceps looked as firm and round as a green apple.

Her struggles were only succeeding in wearing her out. Rationalizing that she should conserve her energy and strength, she suddenly ceased her efforts to escape his inescapable hold and became still. Her breasts rose and fell with every insufficient breath she tried to draw through her nostrils. Gradually the arms restraining her relaxed, but only a trifle.

"My name is Lucas Greywolf."

A raspy voice, as soft and sandy as the wind that blew across the desert, spoke directly into her ear. It was a gentle sound, but Aislinn wasn't deceived. Like the winds it reminded her of, she thought, it could be whipped into a fury with the slightest provocation.

And considering the source of that whispery voice, such a whimsical shift was probable. Frightfully so.

The name Lucas Greywolf had been repeated over television signals and radio frequencies throughout the day. Last night the Indian activist had escaped from the federal prison camp in Florence, about fifty miles away. Lawenforcement agencies were combing the state in search of the escaped convict. And he was in her kitchen!

"I need food. Rest. I won't hurt you if you cooperate," he growled close to her ear. "If you even try to scream I'll be forced to gag you. Do we have a bargain?"

She nodded once in agreement and the hand came away from her mouth cautiously. As soon as it was removed, she gasped for air. "How did you get here?"

"On foot, mostly," he replied, without elaboration or apparent concern. "You know who I am?"

"Yes. They're looking all over for you."

Her initial anger had dissipated. She wasn't a coward, but she wasn't a fool either. Heroics had their place, but now wasn't the time to start playing Wonder Woman. This intruder was no petty thief. Lucas Greywolf should be considered dangerous. All the news reports said so.

What was she to do? Overpowering him was unthinkable. He'd have no difficulty subduing her, and in the process she would probably get hurt. No, the only way she could possibly hope to outmaneuver him was by using her wits, while waiting for an opportunity to escape.