Items related to China : The Culture (The Lands, Peoples, and the Cultures...

Kalman, Bobbie China : The Culture (The Lands, Peoples, and the Cultures Series)

China : The Culture (The Lands, Peoples, and the Cultures Series) 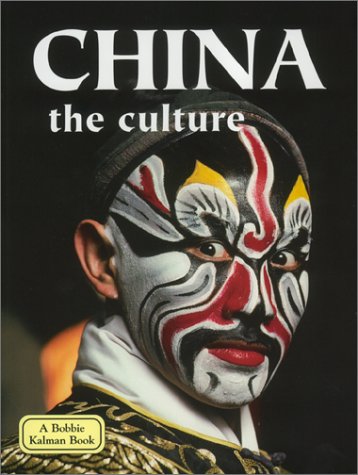 Discusses various aspects of life in China, including cuisine, performing and traditional arts, festivals, and parades.

Taken from Chapter 5: Japanese theater Noh theater Noh is Japan's oldest form of theater. Performances date back to the fourteenth and fifteenth centuries when plays were put on for the samurai and upper classes. Noh theater is still performed today. The most famous plays are based on legends and folktales. Noh plays often have a dreamlike quality and feature ghosts and spirits. Their timeless themes stress that life is like a wheel. Good and bad fortune come and go in never-ending cycles. Noh theater is well known for its masks and spectacular costumes. The two main characters change their masks frequently to reveal different emotions. If the heroine is miserable, she wears a mask to show her sadness. When she feels better, she puts on a happy mask. The scenery of a Noh play is simple; sometimes the stage is almost bare.

Grade 3-5-- At first glance, these offerings look spectacular, with superb, unusual, well-chosen color photos that make one positively salivate for the text. Closer inspection, however, destroys first impressions. The overuse of exclamation points to pepper the text leaves one with a bad taste of condescension. Photo captions are often confusingly placed, sometimes nowhere near the pictures they detail. Some captions do not describe their photos adequately. For example, in . . . People there is a photo of a Japanese family dining; the caption reads (in part) ". . . the sliding doors that look like windows are called shoji. The other doors with the mountain designs are called fusuma." The trouble is, those latter doors are simply not there. In . . . Culture, Kalman's definition of Kabuki is way off the mark, fitting Kyogen (peasant farce) far better--Kyogen, of course, is nowhere mentioned. The same volume gives, rather gratuitously, instructions for making an origami kimono; after devoting 4 out of 32 pages in . . . People to the story of Sadako and the thousand paper cranes, an origami crane would have been far more suitable in that volume. In . . . Land the "samurai-Q" (I-Q) is dubious at best, quizzing largely on material that is not covered in the text. The explanation of the Japanese language in . . . People is oversimplified to the point of being misleading, and transcription of the language throughout is sometimes sub-standard--most glaringly "plastic food" in . . . People . Each volume has a glossary, but entries are generally too vague to be of value. Ultimately, there is scant justification for issuing this opus in three slender volumes rather than one.
- John Philbrook, San Francisco Public Library
Copyright 1989 Reed Business Information, Inc.

1. China : The Culture (The Lands, Peoples, and the Cultures Series)

2. China : The Culture (The Lands, Peoples, and the Cultures Series) Kalman, Bobbie