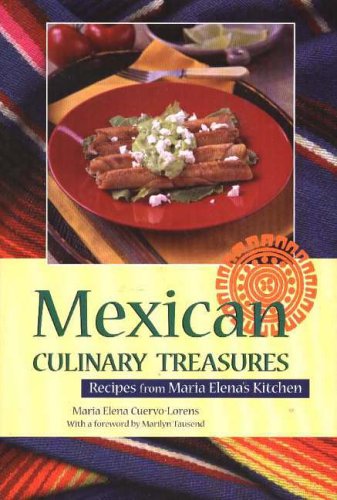 In Mexican Culinary Treasures, Mexican native Maria Elena Cuervo-Lorens welcomes you into her kitchen. She takes you back to the Sundays of her childhood, spent around her grandmother's table; on a shopping expedition with her mother to Mercado La Merced; and for a merienda (snack) of café con leche and biscochos (sweet rolls) at a bakery in downtown Mexico City. Many of the recipes shared were handed down by her mother and grandmother; others were collected from favorite restaurants. The authentic recipes in Mexican Culinary Treasures include old favorites such as tacos, quesadillas, and enchiladas, as well as the nouvelle cuisine of cosmopolitan Mexico City: crepes filled with cuitlacoche, oysters with chipotle chile, and chicken in prune and red wine sauce. This beautifully written book brings Mexico's vivid, enticing flavors into your kitchen.

Maria Elena Cuervo-Lorens was born and raised in Mexico City. She now resides in Victoria, British Columbia, where she shares her love of cooking and her native Mexico as a cooking instructor. She is also the author of Maria Elena's Mexican Cuisine (General Store Publishing House, 1993) and some of her recipes were included in Cocina de la Familia (Simon & Schuster, 1997), a recipient of the prestigious Julia Child Award.