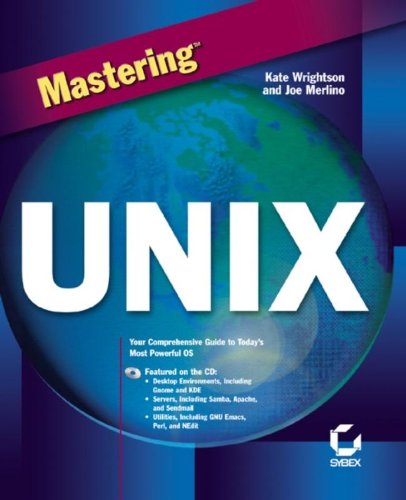 Mastering Unix is your source for everything you need to know about today's most influential operating system. Inside, two Unix experts provide essential information on a wide range of Unix flavors, concentrating on Linux, FreeBSD, and Solaris8. Whether you're just getting started with Unix or want a resource to help you handle system administration's toughest chores, this example-filled book will answer all your questions and promote the skills you need to succeed.

Note: CD-ROM/DVD and other supplementary materials are not included as part of eBook file.

This fine, big (over 900 pages) book about the original operating system, Unix, is aimed at beginners and long-term users alike. Hardcore system admin folk may find that there is too much introductory padding for what they are after (although almost half of the book is devoted to basic system admin, network admin, and administering services), but for most users of Unix, this is an excellent guide.

Mastering Unix is targeted at those using one of the three most popular Unix renditions (Solaris, FreeBSD, and the ubiquitous Linux), and it is a real strength of the book that Linux and open source are properly explained and contextualized.

The history of Unix is briefly but fully walked through, and then the book describes the OS's structure and how it uses files and directories. Scripting is covered (the focus is on the bash shell; other shells are given comparatively short shrift), and a useful overview of differing text editors is covered. The writing is clear throughout and the examples useful and illuminating. Despite the book's size, the text never feels exhaustive, and although this may not be the only Unix book to consider having on your desk, it should definitely be among them.

Kate Wrightson and Joe Merlino are freelance technical writers, and authors of several other books about Linux and Unix. They live in Athens, Georgia, with their two dogs.