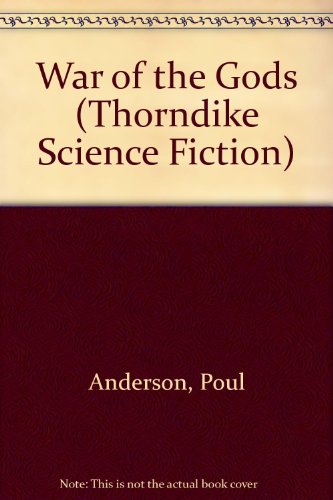 The epic saga of the legendary Viking king and warrior, Hadding, is a masterpiece of historical fantasy. Acclaimed science fiction and fantasy author Poul Anderson has extensively researched the legend to piece together as much authentic material as possible. In re-creating the tale of the Danish king some compare to Arthur, Anderson also gives us a taste of life as it was really lived in the Viking era.

"One of the field's greatest writers.... War of the Gods is one of a number of Anderson's works that will stand the test of time." --Orlando Sun-Sentinel

"One of science fiction's most revered writers." --USA Today

"Anderson has produced more milestones in contemporary science fiction and fantasy than any one man is entitled to." --Stephen R. Donaldson

The bestselling author of such classic novels as Brain Wave and The Boat of a Million Years, Poul Anderson won just about every award the science fiction and fantasy field has to offer. He has won multiple Hugos and Nebulas, the John W. Campbell Award, The Locus Poll Award, the Skylark Award, and the SFWA Grandmaster Award for Lifetime Achievement. His recent books include Harvest of Stars, The Stars are also On Fire, Operation Chaos, Operation Luna, Genesis, Mother of Kings, and Going for Infinity, a collection and retrospective of his life's work. Poul Anderson lived in Orinda, California where he passed away in 2001.

Book Description G K Hall & Co, Thorndike, Maine, U.S.A., 1998. Hard Cover. Condition: Good. Respectable LARGE PRINT library withdrawal in the plastic, protective covers. Stamped at the page edge with a card pocket pasted on the inside cover page. Some shelf wear to the covers and a bit of scuff to the page edge. This edition is PRESENTABLE!. Seller Inventory # LgPrLib226VII9

Book Description Thorndike Press. Hardcover. Condition: Good. A copy that has been read, but remains in clean condition. All pages are intact, and the cover is intact. The spine may show signs of wear. Pages can include limited notes and highlighting, and the copy can include previous owner inscriptions. An ex-library book and may have standard library stamps and/or stickers. At ThriftBooks, our motto is: Read More, Spend Less. Seller Inventory # G0783803001I3N10

Book Description G K Hall & Co, 1998. Condition: Good. A+ Customer service! Satisfaction Guaranteed! Book is in Used-Good condition. Pages and cover are clean and intact. Used items may not include supplementary materials such as CDs or access codes. May show signs of minor shelf wear and contain limited notes and highlighting. Seller Inventory # 0783803001-2-4