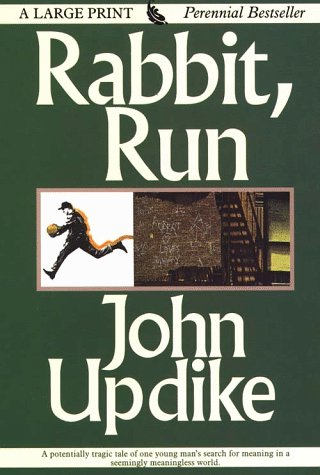 Tired of the responsibility of married life, Rabbit Angstrom leaves his wife and home

I read Rabbit, Run when I was in high school (and it wasn't even a school assignment!). Twenty years later (at least!), three very vivid scenes from that book still pop into my head from time to time. The first is the used-car lot, where Rabbit Angstrom, the former basketball star, works for his father-in-law. The second scene is in a very red Chinese restaurant that had changed over from a French restaurant only the week before. Rabbit is there with his old coach and two women that are not their wives, and they drink daiquiris and whiskey sours. This restaurant could have been (and was) in my small town. The third scene is the most harrowing, and I've repeated it as a cautionary tale to young mothers for years, telling the story as if it had happened to someone I know. Janice, Rabbit's wife, who slugs alcohol throughout her pregnancy, is drunk and bathing her newborn baby when something terrible happens. I won't ruin it by telling you more. I read hundreds of books a year, both for my job and for pleasure, so the fact that parts of this book are so indelibly etched in my mind is a testament to the talent and genius of John Updike.
P.S. all of the other books in the Rabbit series are equally unforgettable.
--Maureen O'Neal

"Brilliant and poignant...By his compassion, clarity of insight and crystal-bright prose, he makes Rabbit's sorrow his and our own."

Harry Angstrom was a star basketball player in high school and that was the best time of his life. Now in his mid-20s, his work is unfulfilling, his marriage is moribund, and he tries to find happiness with another woman. But happiness is more elusive than a medal, and Harry must continue to run--from his wife, his life, and from himself, until he reaches the end of the road and has to turn back....