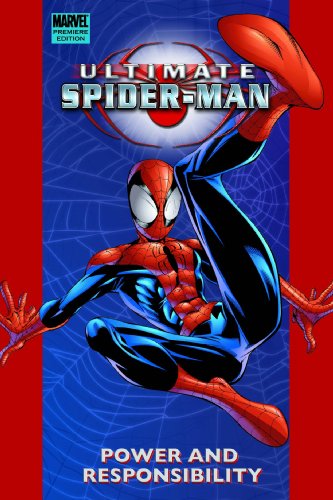 With great power comes great responsibility. In 1963, these prophetic words launched one of the most successful and recognizable characters of the 20th century... Spider-Man! The powers granted bookish Peter Parker by a radioactive spider have fueled the imaginations of fans worldwide for nearly 40 years. With the dawning of a new age, however, comes a hero for a new millennium... Ultimate Spider-Man! Updating Spider-Man for the 21st century was no easy task, and it took the brilliant minds of Bill Jemas and Brian Michael Bendis to do just that. With the artistic talents of Mark Bagley and Art Thibert breathing new life into this legendary mythos, Spider-Man has reasserted himself as one of the most popular characters in the world! Collects Ultimate Spider-Man #1-7.

Spider-Man has been a perpetual favorite of comics fans since his introduction in 1962, and judging by the recent blockbuster film, he's still hot. This excellent series re-boots the character from the beginning, reenacting Spider-Man's origin in the present day. The story is similar to, but not based on, the Spider-Man film. Brainy teenager Peter Parker gains super-powers after being bitten by a spider, loses his likable Uncle Ben to violent crime, and learns once again that "with great power comes great responsibility." The scenario by Marvel president Jemas and Brian Michael Bendis makes some intelligent revisions to the original, and the artwork is realistic, detailed, colorful, and dynamic. Bendis's excellent dialog is true to life-his teenagers sound like teenagers-and his scripting for this and other series won him the 2002 Eisner Award for best writer. An even better choice for most libraries is the hardcover Ultimate Spider-Man edition, which collects the entire contents of this and the second paperback collection, Double Trouble, into one sharp-looking oversized book. With wide crossover appeal to teens and older fans, Ultimate Spider-Man, whether in separate paperback volumes or in hardcover, is an essential purchase for all public libraries.
Copyright 2002 Reed Business Information, Inc.