Items related to Battle of Brooklyn 1776 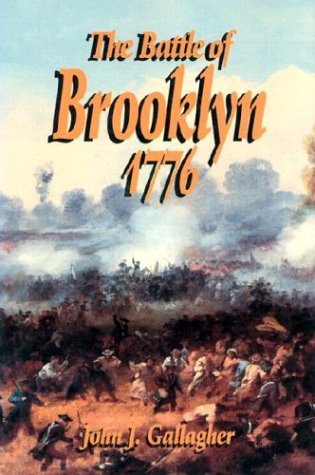 This popular 1995 work is now available in trade paperback for all those who have still not read a vivid, exciting account of the largest battle of the American Revolution (albeit a crushing American defeat) and for all those who continue to refer to the clash as The Battle of Long Island.â At Brooklyn, George Washington commanded the largest army that he would handle throughout the Revolution, and though he did not at first succeed, the fighting that day set the stage for victories to come. In his shot-by-shot account of the largest and bloodiest battle of the American Revolution, Gallagher recreates the fierce encounter of 27 August 1776 in which twenty thousand British, Hessian and Loyalist troops defeated ten thousand patriot soldiers. . . . the book offers many perceptive observations and the author succinctly summarizes the lessons derived . . . this book is recommended reading for those who cherish the heritage of the gallant `rabble in armsâ that risked all for American independence.â Long Island Historical Journal Long neglected . . . the Battle of Brooklyn is given comprehensive coverage . . . using a lively writing style Gallagher makes it easy to visualize the actual skirmishes by providing interesting details.â Flintlock and Powderhorn

John J. Gallagher, formerly a member of U.S. Military Intelligence and currently a forensic historians, has written extensively on military history, as well as on fortifications and military architecture. He is married and currently lives in Brooklyn, NY.

Gallagher, a Brooklyn-based forensic historian, here addresses an important subject. Brooklyn, once known as Long Island, constituted one of the American Revolution's first, largest and most neglected actions. His thesis-that the battle's style reflected the Revolution's nature as "democratic warfare," freed from conventional restrictions-is provocative. However, Gallagher undermines his case by dawdling in the effort to establish background information for the battle and armies; his account of real warfare is anticlimactic. Moreover, informed readers will wince at his factual errors: the British army, for example, possessed no green-coated rifle regiment in 1776. Illustrations not seen by PW.
Copyright 1994 Reed Business Information, Inc.