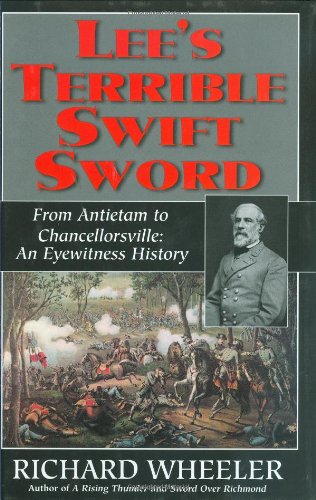 From Antietam to Chancellorville, this is an eyewitness account of the man himself, his ambitious and powerful successes against a poorly led foe which helped to promote an overconfidence that he could go North again, to Gettysburg, and win.

This latest in Wheeler's long line of Civil War and WW II ``eyewitness histories'' (On Fields of Fury, 1991, etc.) follows the Union and Confederate forces in the East between September 1862 and May 1863, a time during which Robert E. Lee became renowned as one of the most brilliant commanders ever produced by America. ``Heroes of many defeats, we are not inclined to give gratuitous confidence to anyone,'' wrote a captain in the Federal Army of the Potomac to his mother. His pessimism was warranted: In just the nine-month period covered by this account, inept commanders squandered Union advantages in troop strength time and again, bringing Southern morale to its crest and Northern spirit to its low ebb. At Antietam, George McClellan frittered away the chance of a lifetime--an intercepted order of Lee's--and had to accept a draw in the bloodiest day of the war; at Fredericksburg, Ambrose Burnside hurled his forces repeatedly against impregnable enemy positions in a stupid, needless sacrifice; and at Chancellorsville, boastful Joseph Hooker, after executing a daring maneuver, inexplicably lost his nerve when Lee and Stonewall Jackson countered with their own tactical masterpiece. Wheeler never leaves his own authorial thumbprint on this self-effacing narrative but, once again, he has combed through memoirs, diaries, and letters to convey the impact of war on officers and enlisted men. Some scenes are extraordinarily vivid or moving: Confederate General John Gordon, wounded five times at Antietam before being carried off; Union soldiers dodging a hail of bullets at Fredericksburg just for a plug of tobacco; a Union officer putting a hopelessly wounded soldier out of his misery, only to be instantly killed himself; and Stonewall Jackson's lingering death after being wounded by friendly fire at Chancellorsville. An important chapter in the Civil War, seen through the participants' own graphic and powerful testimony. (Twenty-five maps and 108 b&w illustrations--not seen.) -- Copyright ©1992, Kirkus Associates, LP. All rights reserved.

This latest "eyewitness" history follows the formula of Witness to Appomattox ( LJ 4/1/89), Sword Over Richmond ( LJ 4/1/86), and the author's other previous Civil War books. Excerpts from participants' writings carry the story forward, while Wheeler provides connecting narrative. This volume covers the Confederacy's high tide in the East, from the bloody draw at Sharpsburg through the striking Southern victories at Fredricksburg, Second Manassas, and Chancellorsville. Unlike earlier books in the series, it contains enough maps to render the strategic and tactical situations understandable, although the episodic structure inherent in the organization sometimes obscures the big picture. Nonetheless, an exciting and well-told story with vivid characterizations--especially of such key leaders as Stonewall Jackson, Robert E. Lee, and George McClellan--that enliven the narrative. Excellent for general readers.
- Thomas E. Schott, Office of History, 17th Air Force, Sembach, Germany
Copyright 1992 Reed Business Information, Inc.