Items related to Death With Honors 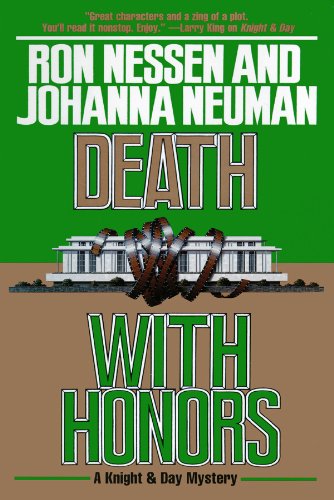 James reads in a rich baritone with an almost lackadaisical style. Even when reporter and heroine Jane Day is "on deadline," the pacing is smooth and concise, not rushed. Nessen and Neuman develop several superb characters in this classic whodunit involving Carla Caldwell, an aging movie star, who dies backstage at the Kennedy Center. Black detective A.L. Jones is brought to life by James's portrayals as the story reveals some of the D.C. Police Department's problems. Politics, Hollywood glitz, McCarthyism, and murder make the perfect mix. S.C.A. © AudioFile 2001, Portland, Maine-- Copyright © AudioFile, Portland, Maine

This lackluster addition to the series starring liberal Washington Post reporter Jane Day and her lover, right-wing radio talk-show host Jerry Knight (Knight and Day; Press Corpse), centers around the murder of a veteran actress about to receive a Kennedy Center Honor for lifetime achievement in entertainment. Jane is writing a profile on the honoree, Carla Caldwell, a left-wing feminist who stood up to Senator McCarthy decades ago. At a small ceremony at the White House, the actress publicly protests the current president's reprimand of the film industry for its emphasis on violence and sex, suggesting his stance slights the First Amendment. The actress's dramatic protest riles conservatives in politics, religion and art, including Jerry, while rallying a like assemblage of liberals. When her body is discovered in her Kennedy Center dressing room the night of the gala event, D.C. homicide detective A.L. Jones gets the case and, feeling out the dead woman's milieu, asks Jane and Jerry to help. They unearth much of interest in Carla's past, including a daughter whose unidentified father might be a famous conservative politician. Readers will likely catch on to the culprit's identity early, leaving unsolved a bigger mystery: why an intelligent, savvy woman like Jane wastes her time on the thoroughly unlikable Jerry.
Copyright 1998 Reed Business Information, Inc.