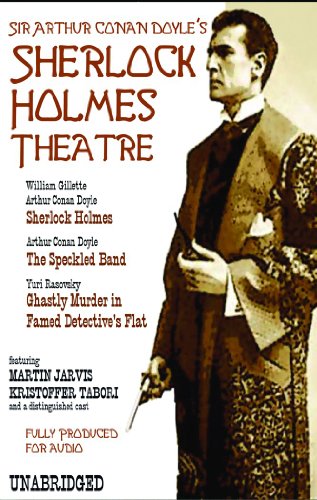 For all Sherlock Holmes fans, Blackstone Audiobooks is pleased to present the first audio recordings ever of the only two Holmes plays written by his creator, Sir Arthur Conan Doyle, The Napoleon of Crime and The Speckled Band, along with a newly created one-act comedy, Ghastly Double Murder in Famed Detective’s Flat. These new, specially commissioned productions of the Hollywood Theater of the Ear star Audie Award-winning readers and a full cast in three exceptional dramas, a unique, must-have audio for all Sherlockians.

Sir Arthur Conan Doyle (1859-1930) was born of Irish parentage in Scotland. He studied medicine at the University of Edinburgh, but he also had a passion for storytelling. His first book introduced that prototype of the modern detective in fiction, Sherlock Holmes. Despite the immense popularity Holmes gained throughout the world, Doyle was not overly fond of the character and preferred to write other stories. Eventually popular demand won out and he continued to satisfy readers with the adventures of the legendary sleuth. He also wrote historical romances and made two essays into pseudoscientific fantasy: The Lost World and The Poison Belt.

A complete cast performs the only two Holmes plays written by Sir Arthur Conan Doyle, as well as a spoof production by the audiobook's producer, Yuri Rasovsky. In all three, Rasovsky combines a talented cast, spot-on sound effects, and a rich musical score to achieve a stunning audio production. Every character, every cast member, every special effect, and every note of music merits applause. The first two plays are vintage Conan Doyle--full of clues for the discerning listener, full of mystery for all, with a satisfying "aha!" at the end. In the third, Rasovsky presents a clever portrayal of Holmes in retirement, killing for pleasure and running off with Watson's wife. Once you get over the shock, you'll never read Sherlock the same way again. R.L.L. Winner of AudioFile Earphones Award © AudioFile 2005, Portland, Maine-- Copyright © AudioFile, Portland, Maine