Items related to The Forsyte Saga 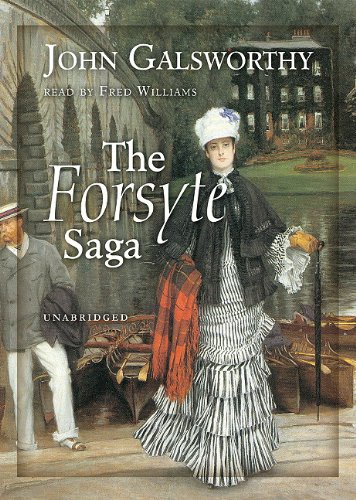 The Forsyte Saga chronicles the ebbing social power of the upper-middle class Forsyte family through three generations, beginning in Victorian London during the 1880s and ending in the early 1920s. The saga begins with Soames Forsyte, a successful solicitor who buys land at Robin Hill on which to build a house for his wife Irene and future family. Eventually, the Forsyte family begins to disintegrate when Timothy Forsyte, the last of the old generation, dies at the age of 100.

In the three novels and two interludes that comprise the saga, Galsworthy documented a departed way of life, that of the affluent middle class that ruled England before the 1914 war. Galsworthy's masterly narrative examines not only their fortunes but also the wider developments within society, particularly the changing position of women.

JOHN GALSWORTHY (1867-1933), English novelist and playwright, went to Oxford to study law but turned to literature after he met Joseph Conrad on a voyage. The Man of Property (1906), the first of the 'Forsyte Chronicles', established his reputation. He was awarded the Nobel Prize for Literature in 1932.

''A social satire of epic proportions and one that does not suffer by comparison with Thackeray's Vanity Fair...the whole comedy of manners, convincing both in its fidelity to life and as a work of art.'' --New York Times