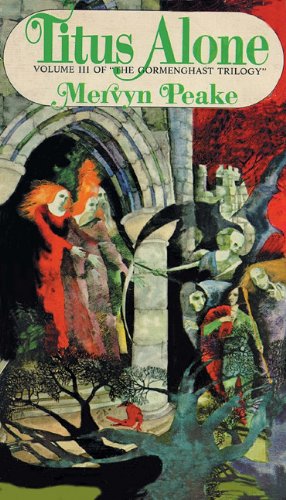 A doomed lord, an emergent hero, and an array of bizarre creatures haunt the world of the Gormenghast novels, considered to be some of the greatest fantasy classics of all time. At their center is the seventy-seventh earl, Titus Groan, who stands to inherit the miles of rambling stone and mortar that form Gormenghast Castle and its kingdom.

In this third volume, Titus turns against the iron discipline of Gormenghast Castle, abdicating his throne and setting forth on an uncertain quest-for himself. His pilgrimage leads to encounters with mysteriously omnipotent police and a battle to the death with Veil, a fearsome ogre with a body like whips and a face that moves like the shiftings of the gray slime of the pit. In his quest for independence from his legacy, Titus successfully captures the universal struggle to come of age.

This final installment in the Gormenghast trilogy is a fantastic triumph-a conquest awash in imagination, terror, and charm.

Mervyn Laurence Peake (1911-1968) is an author best known for his Gormenghast fantasy fiction trilogy. He also published illustrated verse and short stories for children, plays, short stories, and novels. He was awarded the W. H. Heinemann Foundation Prize by the Royal Society of Literature in 1950. He was born and raised in China until the age of eleven. He went on to study at the Royal Academy School in London, where he developed as an artist, designer, and writer. He worked as an artist on the island of Sark for several years and then returned to London to hold several exhibitions of his artwork.

"[Peake's books] are actual additions to life; they give, like certain rare dreams, sensations we never had before, and enlarge our conception of the range of possible experience."

A feat of storytelling unmatched in wit or imagination.

Mervyn Peake is a finer poet than Edgar Allan Poe, and he is therefore able to maintain his world of fantasy brilliantly...It is a very, very great work...a classic of our age.

-- "Robertson Davies on the Gormenghast trilogy"