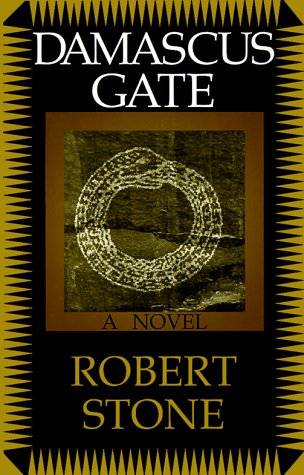 In a novel of political intrigue and religious fanaticism set in Jerusalem, an expatriate American journalist becomes drawn into duplicity on both sides of the Israeli-Arab conflict

In his earlier novels, Robert Stone has taken us to such hot spots as Vietnam, Central America, and that ultimate sinkhole of depravity we call Hollywood. This time around, it's Jerusalem. Given Stone's gift for depicting both political and personal embroilment--indeed, for making the two inextricable--this particular city is an inspired choice. For starters, Jerusalem remains a sacred destination for Muslims, Jews, and Christians and a hotly contested one. It's also a magnet for hustlers, fanatics, and millennial dreamers, a generous assortment of whom populate the pages of Damascus Gate. As always, Stone introduces a (relatively) innocent American into the picture--a journalist named Christopher Lucas. This career skeptic prides himself on his detachment: he prefers the kind of story "that exposed depravity and duplicity on both sides of supposedly uncompromising sacred struggles. He found such stories reassuring, an affirmation of the universal human spirit." Yet Lucas, a lapsed Catholic, has journeyed to Jerusalem at least in part to recharge his devotional batteries. And as he's slowly drawn into a terrorist plot--which involves drugs, arms smuggling, and a plan to blow up the Temple Mount--Lucas sheds his detachment in a hurry. Stone's novel functions as an expert thriller, whose slow, somewhat clunky wind-up is more than compensated for by a brilliant grand finale. It is also, however, a dogged exploration of faith, in which cynics and true believers jostle for predominance. "Life was so self-conscious in Jerusalem," the author reflects, "so lived at close quarters, by competing moralizers. Every little blessing demanded immediate record." It's hard to imagine a more vivid record of these mutual blessings--and maledictions!--than Robert Stone's.

ROBERT STONE is the author of six previous novels: A Hall of Mirrors, Dog Soldiers winner of the National Book Award), A Flag for Sunrise, Children of Light, Outerbridge Reach, and Damascus Gate. His story collection, Bear and His Daughter, was a finalist for the Pulitzer Prize.

Book Description Thorndike Press, 1998. Condition: Good. Largeprint. Former Library book. Shows some signs of wear, and may have some markings on the inside. Seller Inventory # GRP14725722

Book Description Thorndike Press. Hardcover. Condition: Good. A copy that has been read, but remains in clean condition. All pages are intact, and the cover is intact. The spine may show signs of wear. Pages can include limited notes and highlighting, and the copy can include previous owner inscriptions. An ex-library book and may have standard library stamps and/or stickers. At ThriftBooks, our motto is: Read More, Spend Less. Seller Inventory # G0786216328I3N10

Shipping: US$ 10.39
From United Kingdom to U.S.A.
Destination, rates & speeds