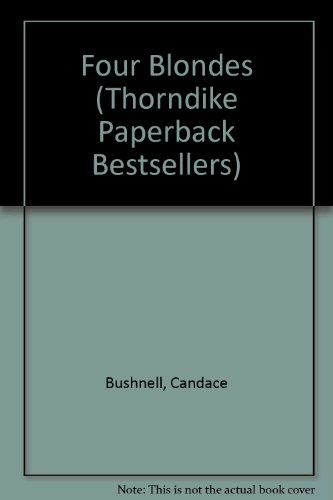 Four very different women endure romantic intrigues, betrayals, liaisons, and victories as they seek love amid the playgrounds of the rich and powerful.

Candace Bushnell made her reputation as the creator of the HBO special Sex and the City, based on her book of the same name (based in turn on her eros-intensive New York Observer column). In Four Blondes, she returns with a quartet of novellas on her favorite subject--the mating habits of wealthy sex-, status-, and media-obsessed New Yorkers. These are people for whom a million or two does not make one rich, and who consider Louis Vuitton and Prada bare necessities. Janey Wilcox, for example, is a former model who each summer chooses a house in the Hamptons--or, rather, picks up a wealthy man with a pricey rental. With one movie in her past, her "lukewarm celebrity was established and she figured out pretty quickly that it could get her things and keep on getting them, as long as she maintained her standards." Yet even Janey eventually realizes that what she's getting isn't exactly what she wants. Cecelia, on the other hand, has gotten the ultimate prize: a royal husband. Still, she finds herself descending into paranoia as the Manhattan media circus reports her every flaw. Then there's Winnie Diekes, a high-powered magazine columnist whose marriage flounders as she pushes her unambitious husband to write the book that will make him--and her--famous.

Finally, in the most clearly autobiographical story, a writer gives up on the commitment-impaired men of New York and goes to London to find a husband. There she trolls for the typical Englishman--"a guy who had sex with his socks on, possessed a microscopic willy, and came in two minutes." Bushnell is famous for this sort of sexual brashness, and the book is full of her sharp wit, both in and out of the boudoir. She also clearly enjoys her characters and their misadventures, with one exception: the politically correct Winnie, with her distaste for alcohol, night life, and casual sex, inspires an odd sort of authorial contempt. Otherwise, though, Bushnell's ironic takes on the sexual foibles of the rich and famous are mordant, mischievous fun. --Lesley Reed

With its uncensored observations of the mating rituals of Manhattan's elite, Candace Bushnell's "Sex and the City" created a sensation, becoming an international bestseller and a worldwide hit TV series.

Book Description Thorndike Press. Paperback. Condition: Very Good. A copy that has been read, but remains in excellent condition. Pages are intact and are not marred by notes or highlighting, but may contain a neat previous owner name. The spine remains undamaged. An ex-library book and may have standard library stamps and/or stickers. At ThriftBooks, our motto is: Read More, Spend Less. Seller Inventory # G0786231521I4N10