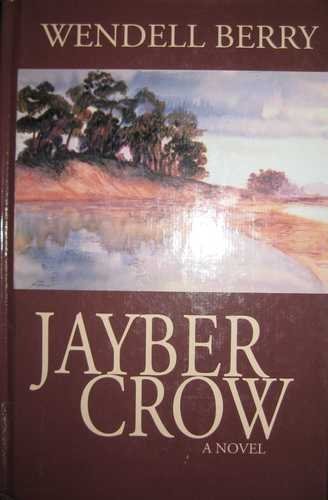 The life story of Jayber Crow, barber, of the Port William Membership, as written by himself.

Jayber Crow, born in Goforth, Kentucky, orphaned at age ten, began his search as a 'pre-ministerial student' at Pigeonville College. There, freedom met with new burdens and a young man needed more than a mirror to find himsself. But the beginning of that finding was a short conversation with his profound professor of New Testament Greek: 'You have been given questions to which you cannot be given answers.' After the flood of 1937, Jayber becomes the barber of the small community of Port William, Kentucky. From behind the barber chair he lives out the questions that drove him from seminary and begins to accept the gifts of community that enclose his answers.

The questions who and what and how and why are no doubt useful and occasionally even noble in their place. But for Wendell Berry, whose spare and elegant prose has long testified to the rural American values of thrift and frugality, four interrogatives must seem a waste, when one will do. Where is the ultimate qualifier, the sine qua non, for both the author and his characters. Place shapes them and defines them; the winding Kentucky River and the gentle curves of the Kentucky hills find an echo in their lilting speech and brusque affections.

Jayber Crow is another story of the Port William membership, the community whose life--and lives--Berry has unfurled over the course of a half dozen novels. Jayber himself is an orphan, lately returned to the town. And his status as barber and bachelor places him simultaneously at its center and on its margins. A born observer, he hears much, watches carefully, and spends 50 years learning its citizens by heart.

They were rememberers, carrying in their living thoughts all the history that such places as Port William ever have. I listened to them with all my ears, and have tried to remember what they said, though from remembering what I remember I know that much is lost. Things went to the grave with them that will never be known again.

Jayber tells the town's stories tenderly. Gently elegiac, the novel charts the tension between an urge to isolation and an impulse to connectivity, writ both small and large. As the 20th century moves inexorably forward, swallowing in great mechanized gulps rural towns governed by agricultural rhythms, Port William turns in upon itself. And as Jayber admits quietly, "Once a fabric is torn, it is apt to keep tearing. It was coming apart. The old integrity had been broken." Integrity, both whole and shattered, is key to the stories of Burley Coulter, Cecelia Overhold, Troy Chatham, and above all, Athey Keith and his daughter Mattie, to whom Jayber pledges his undying and unrequited love.

Berry's prose, so carefully tuned that you never know it is there, carries us into the very heart of the land itself; his exquisitely constructed sentences suggesting the cyclic rhythms of his agrarian world. Jayber Crow resonates with variations played on themes of change, looping transitions from war into peace, winter into spring, browning flood destruction into greening fields, absence into presence, lost into found. --Kelly Flynn

In his more than thirty books, Wendell Berry has proven a writer of brilliant moral imagination. Whether he is writing about technology, family life, or small-scale farming, his vision of the human ecology is as important as any in contemporary American letters. Among the many honors he has received are a Guggenheim Fellowship, the Jean Stein Award, the T.S. Eliot Award, a Lannan Foundation Award for nonfiction, and the 2000 Poets' Prize. Berry lives and works in his native Kentucky with his wife, Tanya Berry.

Book Description Condition: Fair. Independent family-run bookstore for over 50 years! Buy with confidence! Book is in acceptable condition with wear to the pages, binding, and some marks within. Seller Inventory # bk0786232226xvz189zvxacp