Items related to In the Land of White Death: An Epic Story of Survival...

Albanov, Valerian In the Land of White Death: An Epic Story of Survival in the Siberian Arctic 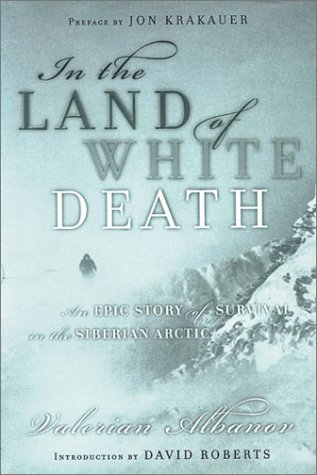 In 1912, thirty-two-year-old Russian navigator Valerian Albanov embarked on an expedition that would prove to be disastrous. His ship, the Santa Anna, froze fast in the pack ice of the treacherous Kara Sea. For nearly a year and a half, the crew of twenty-five men and one woman endured terrible hardships and danger as the ship drifted helplessly north. Then Albanov and thirteen crewmen left the ship, and embarked on a 235-mile journey to reach safety. The fact that any survived is as amazing as the fact that Albanov kept his diary of the ninety-day ordeal.

Review:
In the early 20th-century era of daring polar exploration, the less-trumpeted fishing and hunting expeditions went largely unrecorded. Except, that is, for a recently discovered tale about a Russian hunter and his shipmate. Valerian Albanov's account of his 18-month-long survival in the Siberian Arctic remained unknown until a group of polar-literature enthusiasts rediscovered it in 1997. Translated into English for the first time, In the Land of White Death competes with the adventures of famed heroes Robert Falcon Scott, Apsley Cherry-Garrard, and Ernest Shackleton. And like Scott's and Cherry-Garrard's narratives, Albanov's tale is penned from a diary he kept during his remarkable ordeal.

Albanov's epic begins in 1914, after he leaves the Saint Anna, a sailing vessel bound for Vladivostok and new hunting territory, 7,000 miles across dangerous water. Only a few months into the voyage, the ship is trapped in pack ice, where it drifts helplessly with the Kara Sea ice flow for nearly one and a half years. With supplies dwindling and no hope of rescue, Albanov, the ship's navigator, and 13 of his colleagues leave the boat and the remaining crew to look for land. Outfitted with sleds and kayaks built from scavenged fragments of the Saint Anna, Albanov begins his 18-month trek to Franz Josef Land with a broken chronometer, scant supplies, and a team of inexperienced men.

Facing starvation, subzero temperatures, and the loss of most of his team, Albanov persists, searching for an outpost rumored to be at Cape Flora, 120 miles from his original starting point. He and his last surviving shipmate survive a litany of amazing mishaps: asleep on an ice flow, they are dumped into frozen water while bound in a sleeping bag; scurvy nearly kills Albanov only a few miles from his destination; and once help arrives, they're caught in the first skirmishes of World War I, a conflict of which they had no knowledge.

Albanov's experience is a brief, gripping account of a story that rivals the greatest survival tales in history. The diary style of his tale preserves its emotional authenticity as he trudges his way across the frozen Arctic, and his knack for clear detail only highlights the unbelievable fact that Albanov was lucid enough to write at all during his winter march across a deadly landscape. --Lolly Merrell

From the Inside Flap:
In 1912, six months after Robert Falcon Scott and four of his men came to grief in Antarctica, a thirty-two-year-old Russian navigator named Valerian Albanov embarked on an expedition that would prove even more disastrous. In search of new Arctic hunting grounds, Albanov's ship, the Saint Anna, was frozen fast in the pack ice of the treacherous Kara Sea-a misfortune grievously compounded by an incompetent commander, the absence of crucial nautical charts, insufficient fuel, and inadequate provisions that left the crew weak and debilitated by scurvy.
For nearly a year and a half, the twenty-five men and one woman aboard the Saint Anna endured terrible hardships and danger as the icebound ship drifted helplessly north. Convinced that the Saint Anna would never free herself from the ice, Albanov and thirteen crewmen left the ship in January 1914, hauling makeshift sledges and kayaks behind them across the frozen sea, hoping to reach the distant coast of Franz Josef Land. With only a shockingly inaccurate map to guide him, Albanov led his men on a 235-mile journey of continuous peril, enduring blizzards, disintegrating ice floes, attacks by polar bears and walrus, starvation, sickness, snowblindness, and mutiny. That any of the team survived is a wonder. That Albanov kept a diary of his ninety-day ordeal-a story that Jon Krakauer calls an "astounding, utterly compelling book," and David Roberts calls "as lean and taut as a good thriller"-is nearly miraculous.
First published in Russia in 1917, Albanov's narrative is here translated into English for the first time. Haunting, suspenseful, and told with gripping detail, In the Land of White Death can now rightfully take its place amongthe classic writings of Nansen, Scott, Cherry-Garrard, and Shackleton.

In the Land of White Death : An Epic Story of Survival in the Siberian Arctic

Book Description Hardcover. Condition: GOOD. Spine creases, wear to binding and pages from reading. May contain limited notes, underlining or highlighting that does affect the text. Possible ex library copy, will have the markings and stickers associated from the library. Accessories such as CD, codes, toys, may not be included. Seller Inventory # 3668710898

Book Description Hardcover. Condition: Good. No Jacket. Item is in good condition. Some moderate creases and wear. This item may not come with CDs or additional parts including access codes for textbooks. This may not have a dust jacket. Might be an ex-library copy and contain writing/highlighting. Photos are stock pictures and not of the actual item. Seller Inventory # DS-0786232897-3