Items related to A Treasury of Miracles for Women: True Stories of God's...

A Treasury of Miracles for Women: True Stories of God's Presence Today 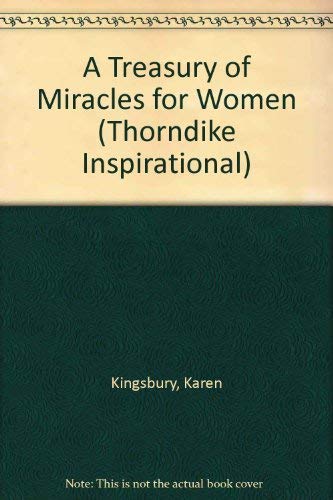 A collection of amazing and touching stories that celebrates women and shows that miracles are still possible.

Karen Kingsbury is a #1 New York Times bestselling author of over 60 works of fiction and nonfiction with nearly 25 million copies in print. Widely considered America's favorite inspirational novelist, she is best known for drawing unforgettable characters and stories which evoke a range of emotions. Karen reaches over 100,000 women annually through national speaking appearances. She and her husband, Don, currently reside in Nashville, TN.

This book is indeed for women, if by women one means white, American, middle-class, conservative Christian mothers. But there's little reason to quibble; such women are exactly Kingsbury's target audience, and few of them will be disappointed by these stories of angels, medical miracles and mothers who really, really love their kids (the only exception being a "childless by choice" woman who really, really loves her house). While Kingsbury claims that these stories are true (there's no documentation or opportunity to corroborate this), she has clearly taken liberties with the dialogue; the conversations between doctors and anguished parents are straight out of 1960s-era medical dramas. The majority of the stories fit a pretty old chestnut of a formula: tragedy happens, the doctor says there's no hope, God intervenes (often in the form of an angel), the patient miraculously gets better, then the doctor shakes his head in disbelief, says that the recovery is inexplicable and admits that he was wrong. In more than one case, the wrong medical advice is, not surprisingly, to abort a gravely ill fetus. Two later chapters are a bit more compelling in that the sick person indeed dies, and the miracle is the good that comes from that death. There's little doubt that Kingsbury's subjects had astonishing experiences, but the nuance, texture and reality of those experiences are lost in the simplistic telling. Luis Palau's It's a God Thing packs the emotional punch Kingsbury is going for, but with considerably less treacle.
Copyright 2002 Cahners Business Information, Inc.

1. A Treasury of Miracles for Women : True Stories of God's Presence Today

Book Description Thorndike Press. Hardcover. Condition: Good. A copy that has been read, but remains in clean condition. All pages are intact, and the cover is intact. The spine may show signs of wear. Pages can include limited notes and highlighting, and the copy can include previous owner inscriptions. An ex-library book and may have standard library stamps and/or stickers. At ThriftBooks, our motto is: Read More, Spend Less. Seller Inventory # G0786243740I3N10

2. A Treasury of Miracles for Women: True Stories of God's Presence Today

Book Description Thorndike Pr, 2002. Condition: Good. A+ Customer service! Satisfaction Guaranteed! Book is in Used-Good condition. Pages and cover are clean and intact. Used items may not include supplementary materials such as CDs or access codes. May show signs of minor shelf wear and contain limited notes and highlighting. Seller Inventory # 0786243740-2-4

3. A Treasury of Miracles for Women: True Stories of God's Presence Today

4. A Treasury of Miracles for Women: True Stories of God's Presence Today