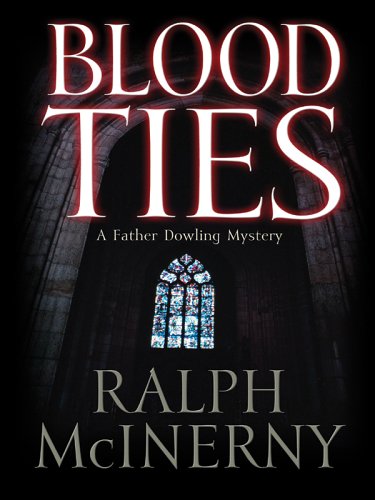 Henry Dolan's adopted granddaughter, Martha Lynch, wants to find her birth parents. Her adoptive parents are frantic, so Henry seeks out Father Dowling for help. Meanwhile Martha's birth father, Nathaniel Fleck, has contacted her birth mother, who turns to lawyer Amos Cadbury for advice. When Nathaniel is murdered two days later, Dowling and Amos must juggle their responsibilities to the families while trying to solve the murder.

RALPH MCINERNY is the author of over thirty books, including a popular mystery series set at the University of Notre Dame, where he has taught for over forty years. He lives in South Bend, Indiana.

The engaging 24th Father Dowling mystery (after 2004's Requiem for a Realtor) explores the moral ambiguities of the choices people make in the wake of a young woman's unwanted pregnancy. McInerny uses a full palette of nothing but grays as Martha Lynch seeks to learn the identity of her birth mother on the eve of her engagement. At the same time, Nathaniel Fleck, who turned his back on Madeline years earlier when she was pregnant, is determined to learn the fate of his child and to make amends. Almost everyone involved, from a lecherous oldster to a sleazy lawyer, shows at least a modicum of decency. And some, like Father Dowling and lawyer Amos Cadbury, both privy to Madeline's and Martha's identities, carefully weigh the one's need for secrecy and the other's for knowledge. When Fleck dies in a suspicious accident, the question becomes not only how the ramifications of Martha's parentage will play out but did someone resort to murder to keep Fleck from finding the answer? McInerny's nimble characterizations and subtle soundings of the moral issues make this a strong entry in the long-running series.
Copyright © Reed Business Information, a division of Reed Elsevier Inc. All rights reserved.

Book Description Thorndike Press. Hardcover. Condition: Good. A copy that has been read, but remains in clean condition. All pages are intact, and the cover is intact. The spine may show signs of wear. Pages can include limited notes and highlighting, and the copy can include previous owner inscriptions. At ThriftBooks, our motto is: Read More, Spend Less. Seller Inventory # G0786279443I3N00

Book Description Thorndike Press, 2005. Condition: Good. A+ Customer service! Satisfaction Guaranteed! Book is in Used-Good condition. Pages and cover are clean and intact. Used items may not include supplementary materials such as CDs or access codes. May show signs of minor shelf wear and contain limited notes and highlighting. Seller Inventory # 0786279443-2-4