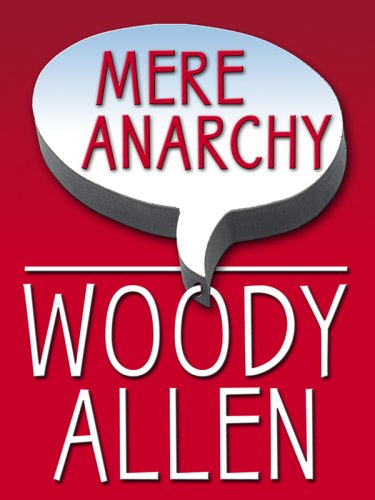 A new collection of eighteen stories, including eight never-before-published pieces, features the author's reflections on everything from nanny tell-alls and film camp to clothes that smell like twice-cooked pork.

Playwright, screenwriter, actor and director, Woody Allen's prolific career has now spanned over four decades. He writes frequently for the New Yorker and has written a number of bestselling volumes including Without Feathers, Getting Even and Side Effects.

To Err Is Human—to Float, Divine

Gasping for air, my life passing before my eyes in a series of wistful vignettes, I found myself suffocating some months ago under the tsunami of junk mail that cascades through the slot in my door each morning after kippers. It was only our Wagnerian cleaning woman, Grendel, hearing a muffled falsetto from beneath myriad art-show invitations, charity squeezes, and pyrite contest jackpots I’d hit that extricated me with the help of our Bugsucker. As I was carefully filing the new postal arrivals alphabetically in the paper shredder, I noticed, amongst the profusion of catalogues that hawked everything from bird feeders to monthly deliveries of sundry drupe and hesperidium, there was an unsolicited little journal, banner-lined Magical Blend. Clearly aimed at the New Age market, its articles ranged in topic from crystal power to holistic healing and psychic vibrations, with tips on achieving spiritual energy, love versus stress, and exactly where to go and what forms to fill out to be reincarnated. The ads, which seemed scrupulously articulated to insulate against the unreasonableness of Bunco Squad malcontents, presented Therapeutic Ironisers, Vortex Water Energizers, and a product called Herbal Grobust designed to implement volumewise madam’s Cavaillons. There was no shortage of psychic advice either, from sources such as the “spiritual intuitive” who double-checks her insights with “a consortium of angels named Consortium Seven,” or a babe ecdysiastically christened Saleena, who offers to “balance your energy, awaken your DNA and attract abundance.” Naturally, at the end of all these field trips to the center of the soul, a small emolument to cover stamps and any other expenses the guru may have incurred in another life is in order. The most startling persona of all, however, has to be the “founder and divine leader of the Hathor Ascension Movement on Planet Earth.” Known to her followers as Gabrielle Hathor, a self-proclaimed goddess who is, according to her copywriter, “the fullness of source manifested in human form,” this West Coast icon tells us, “There is a quickening of Karmic feedback. . . . Earth has entered a spiritual winter which will last 426,000 Earth years.” Mindful of how rough a long winter can be, Ms. Hathor has started a movement to teach beings to ascend to “higher frequency dimensions,” presumably where they can get out more and play a little golf.

“Levitation, instantaneous translocation, omniscience, abil- ity to materialize and dematerialize and so on become part of one’s normal abilities,” the come-hither spiel lays on the unwary with a trowel, proclaiming that “from these higher frequency dimensions, the ascended being can perceive the lower frequencies while those on the lower frequencies cannot perceive the higher dimensions.”

There is a fervid endorsement by someone named Pleiades MoonStar—a name that would cause no end of consternation for me if I were told at the last minute it belonged to my brain surgeon or pilot. Acolytes in Ms. Hathor’s movement must submit to “a humiliating procedure” as part of a routine to dissolve their egos and get their frequencies jacked up. Actual cash payments are frowned upon, but for a little abject fealty and productive labor one can score a bed and a dish of organic mung beans while either gaining or losing consciousness.

I bring all this up because coincidentally, later that same day I was emerging from Hammacher Schlemmer, laid waste by obsessive indecision over whether to buy a computerized duck press or the world’s finest portable guillotine, when I bumped like the Titanic into an old iceberg I had known in college, Max Endorphine. Plump in midlife, with the eyes of a cod and sporting a toupee upholstered with sufficient pile to create a trompe l’oeil pompadour, he pumped my hand and launched into tales of his recent good fortune.

“What can I tell you, boychick, I hit it big. Got in touch with my inner spiritual self, and from there on it was Fat City.”

“Can you elaborate?” I queried, registering for the first time his natty bespoke ensemble and advanced-tumor-sized pinkie ring.

“I guess I shouldn’t really be jawing with someone on a lower frequency, but since we go way back—”

“I’m talking dimensions. Those of us in the upper octaves are taught not to squander healthy ions on mortal troglodytes of which you qualify—no offense. Not that we don’t study and appreciate the lower forms—thanks to Leeuwenhoek, if you get my meaning.” Suddenly, with a falcon’s instinct for prey, Endorphine turned his head toward a long-legged blonde in a micro-miniskirt straining to locate a taxi.

“Clock the apparition with the state-of-the-art pout,” he said, his salivary glands shifting into third.

“Must be a centerfold,” I piped, feeling the sudden onset of heatstroke, “judging from her see-through blouse.”

“Watch this,” Endorphine said, whereupon he took a deep breath and began rising off the ground. To the amazement of both myself and Miss July, he was levitating a foot above Fifty-seventh Street in front of Hammacher Schlemmer. Searching for wires, the sweet young thing brought her show closer.

“Here. Here’s my address,” Endorphine said. “I’ll be home tonight after eight. Drop by. I’ll have you off your feet in no time.”

“I’ll bring the Petrus,” she cooed, stuffing the logistics of their rendezvous into the abyss of her cleavage, and wiggled off as Endorphine slowly descended to ground level.

“Oh, well,” he sighed benevolently, “since I’m deigning to converse with practically a paramecium, I may as well give you the whole schmear. Let’s repair to the Stage Deli and decimate some schnecken while I hold court.” With that there was an audible pop and Endorphine vanished. I sucked in my breath and clasped my hand to my open mouth like a startled Gish sister. Seconds later he reappeared, contrite.

“Sorry. I forgot you bottom-feeders can’t dematerialize and translocate. My error. Let’s just hoof it.” I was still pinching myself when Endorphine began his tale.

“OK,” he said. “Flashback six months prior, when Mrs. Endorphine’s little boy Max was at emotional ducks and drakes over a series of tribulations, which, if you count my misplaced beret, topped Job’s. First, this fortune cookie from Taiwan I was tutoring in anatomical hydraulics eighty-sixes me for an apprentice pie maker, then I get sued to the tune of many dead presidents for backing my Jaguar through a Christian Science Reading Room. Add to that my one son from a previous connubial holocaust gives up his lucrative law practice to become a ventriloquist. So here I am, blue and funky, scouring the town for a raison d’ętre, a spiritual center as it were, when suddenly, out of the ether, I come across this ad in the latest issue of Vibes Illustrated. A spa type of joint that liposuctions off your bad karma, raising you to a higher frequency wherein you can at last hold sway over nature ŕ la Faust. As a rule I’m too savvy to bite on a scam like that, but when I dig the CEO is an actual goddess in human form, I figure what could be bad? And there’s no charge. They don’t take dough. The system’s based on some variation of slavery, but in return you get these crystals, which empower you, and all the Saint-John’s-wort you can scarf up. Oh, I’m leaving out she humiliates you. But it’s part of the therapy. So her minions frenched my bed and affixed an ass’s tail to the back of my trousers unbeknownst to me. Sure I was a laughingstock for a while, but let me tell you, it dissolved my ego. Suddenly I re- alized I had lived in previous lives—first as a simple burgomaster and then as Lucas Cranach the Elder . . . or no, I forget, maybe it was the kid. Anyhow, the next thing I know, I wake up on my crude pallet and my frequency is in the stratosphere. I got like this nimbus around my occiput and I’m omniscient. I mean right off I hit the double at Belmont and within a week I draw crowds every time I show up at the Bellagio in Vegas. If I’m ever unsure about a nag or whether to hit or stick at blackjack, there’s this consortium of angels I tap into. I mean, just ’cause someone’s got wings and is made of ectoplasm don’t mean they can’t handicap. Clock this wad.”

“Oops, excuse me,” he said, fumbling to retrieve some rubies that had fallen out of his jacket when he produced the cornucopia of greenbacks.

“And she doesn’t take any remuneration for this service?” I inquired, my heart taking wing like a peregrine falcon.

“Well, you know, that’s how it is with avatars. They’re all big sports.”

That night, despite a welter of imprecations from the distaff side plus a quick call by her to the firm of Shmeikel and Sons to check if our pre-nup covered the sudden onset of dementia praecox, I found myself skying west to the Sublime Ascension Center with its divinity in residence, a vision in Frederick’s of Hollywood named Galaxie Sunstroke. Bidding me enter the shrine that dominated her compound, an abandoned farm curiously resembling the Spahn ranch of Manson lore, she put down her emery board and got comfortable on a divan.
From the Hardcover edition.

Book Description Hardcover. Condition: GOOD. Spine creases, wear to binding and pages from reading. May contain limited notes, underlining or highlighting that does affect the text. Possible ex library copy, will have the markings and stickers associated from the library. Accessories such as CD, codes, toys, may not be included. Seller Inventory # 3387798929

Book Description Condition: Good. A+ Customer service! Satisfaction Guaranteed! Book is in Used-Good condition. Pages and cover are clean and intact. Used items may not include supplementary materials such as CDs or access codes. May show signs of minor shelf wear and contain limited notes and highlighting. Seller Inventory # 0786298545-2-4

Book Description Hardcover. Condition: Good. No Jacket. Item is in good condition. Some moderate creases and wear. This item may not come with CDs or additional parts including access codes for textbooks. This may not have a dust jacket. Might be an ex-library copy and contain writing/highlighting. Photos are stock pictures and not of the actual item. Seller Inventory # DS-0786298545-3