Items related to Carbon Dates: A Day by Day Almanac of Paleo Anniversaries...

Carbon Dates: A Day by Day Almanac of Paleo Anniversaries and Dino Events 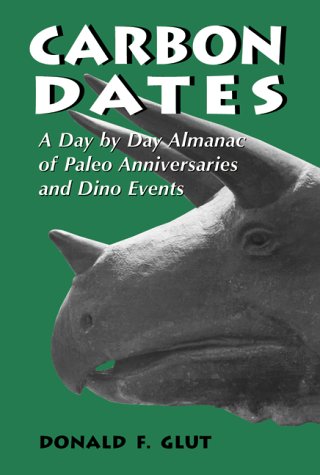 For each date in the calendar year, the author identifies events relating to dinosaurs that happened in various years, including the birthdates of scientists, discoveries, and opening of dinosaur movies.

Screenwriter, novelist, dinosaurian authority, and filmmaker Donald F. Glut lives in Burbank, California. He is the author of Dinosaurs: The Encyclopedia (1997) and its Supplement 1 (1999) and Dinosaur Valley Girls: The Book (1998).

Donald F. Glut is obsessed with dinosaurs. Not just the animals themselves but also their place in popular culture and the continuing struggle to understand their origins, lives, and extinction. His previous work in this area includes Dinosaurs: The Encyclopedia [RBB N 1 97] and New Dinosaur Dictionary (Citadel, 1982). The current volume is much less scholarly, as it tries to bring together material about paleontology, movies, novels, and anything else that contains any mention of dinosaurs at all.

The organization is simple. For every day of the year, one or more events that occurred on that day are listed. The entries vary in length from one sentence to ten sentences and include birth and death dates for scientists and actors, dates of release for books and films, opening dates for significant museums and exhibits, and many other events relating to what Glut calls "dino-culture." A brief bibliography is followed by an extensive and very useful index. Although they are mostly decorative and serve largely to illustrate the pop culture aspects of the dino-culture, the many black-and-white illustrations are a nice addition.

The book is padded with very random, even silly events. Ringo Starr once appeared in a movie with dinosaurs, so his birth is included. So is Rachel Welch's. The dates of publication of several papers treating various aspects of paleontology are also included without any explanation as to their significance. Overall, this book is more of a curiosity than a real reference work. Only the most enthusiastic dinosaur fan will find it of anything more than passing interest. Not recommended for most collections, although public and school libraries that collect absolutely everything about dinosaurs may want to consider purchase.
Copyright © American Library Association. All rights reserved

1. Carbon Dates: A Day by Day Almanac of Paleo Anniversaries and Dino Events