Items related to Royalty Who Wait: The 21 Heads of Formerly Regnant...

Royalty Who Wait: The 21 Heads of Formerly Regnant Houses of Europe 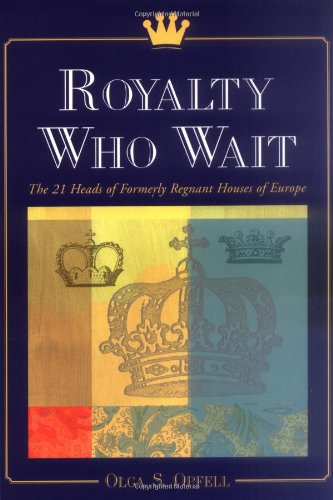 Only seven European monarchies remain intact today; all are constitutional monarchies. Four empires and 16 kingdoms have disappeared in Europe during the last two centuries. The Bourbon kingdom in France vanished first, in 1830; the Greek kingdom most recently, in 1973. Former sovereigns still consider themselves to be kings. Princes, dukes and counts remain, possessed of far-reaching connections to currently reigning monarchs. For some of them the path to headship of the royal houses has been complicated, taking many twists and turns. Two world wars caused the greatest attrition in monarchies. Exile has been bitter for some, happier for others, but in and out of exile the heads of royal families live well. Many are successful in business and as financiers. Many are enthusiastic followers of sports. Some manage large estates; others are still trying to regain royal properties. The chapters are arranged in the chronological order in which the kingdoms disappeared. This book profiles twenty-one heads of formerly regnant houses of Europe, set in historical perspective, and recounting varied life styles, occupations, and interests. At the end of each chapter is a chart or set of charts depicting the line of succession of the headship of the house.

The late Olga S. Opfell was a former college teacher and newspaper reporter and the author of multiple books. She lived in Torrance, California.

"informative...an exhaustive index...an interesting starting point for research into the people, places, and events related to these former houses of Europe...useful...recommended"--ARBA; "unique...highly recommended"--Midwest Book Review; "the first English-language book in more than 20 years to cover in detail the history and lives of the exiled or non-reigning royal families...enjoyable and informative"--Royal Book News.

1. Royalty Who Wait : The 21 Heads of Formerly Regnant Houses of Europe

3. Royalty Who Wait: The 21 Heads of Formerly Regnant Houses of Europe