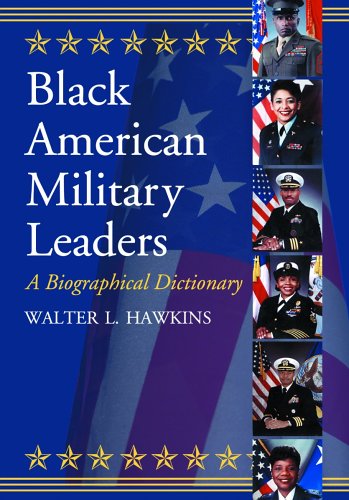 This book is a revised edition of the 1993 African American Generals and Flag Officers: Biographies of Over 120 Blacks in the United States Military. It offers detailed, career-oriented summaries for men and women who often overcame societal obstacles to become ranking officers in the U.S. military. Included now are members of all branches of the armed services (Army, Navy, Air Force and Marine Corps), as well as the National Guard and Reserves.

When African American Generals and Flag Officers: Biographies of over 120 Blacks in the United States Military was published by McFarland in 1993, it received good reviews for the depth and detail of its entries. Fourteen years later, that work has been revised to include almost 10 times as many biographies. Black American Military Leaders: A Biographical Dictionary includes more than 1,000 black Americans who changed the image of the U.S. military. While the 1993 edition covered only generals and naval flag officers, this new edition contains 295 entries for generals and admirals, 260 other black officers, and 550 senior enlisted personnel. Most entries have photographs and range in length from one-quarter to half of a page. Each entry lists the person's rank and gives information on family, schools attended, promotion in the ranks, commands, and awards and decorations. All branches of the military as well as the National Guard and Reserves are represented. Appendixes list black American Medal of Honor winners by date of action and leaders by military branch and rank. There is no index. Several useful features of the first edition have been dropped, including a list of the first black generals and a chronology, which could easily have been updated. Overall, though, the author (a command sergeant major, USAR retired.) has achieved his stated purpose: "to inform the public of the significant impact these black individuals have had on the United States military." This would be a good purchase for any public and academic library with a need for material on the topic. Talley, Kaye

Book Description McFarland & Company, Inc., Jefferson, NC, 2007. Hardcover. Condition: Near Fine. No Jacket. First Edition. 549pp, hundreds of b/w portrait photographs. An excellent copy. (Due to the size/weight of this book, an extra shipping charge may apply to destinations outside the U.S.A.) Size: 4to - over 9ľ - 12" tall. Book. Seller Inventory # 180526

Book Description McFarland & Company, 2007. Condition: Good. A+ Customer service! Satisfaction Guaranteed! Book is in Used-Good condition. Pages and cover are clean and intact. Used items may not include supplementary materials such as CDs or access codes. May show signs of minor shelf wear and contain limited notes and highlighting. Seller Inventory # 0786424869-2-4