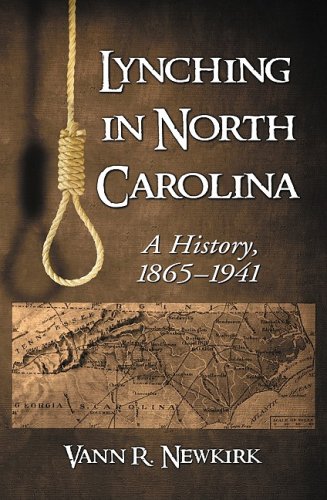 From the end of the Civil War through 1941, there were 168 North Carolinians who lost their lives to lynching. This form of mob violence was often justified as a means of controlling the black population; protecting white wives and daughters; and defending family honor. Legal attempts to deter lynching--including the 1893 law that classified it as a felony and sought to hold a county liable for damages--generally failed because of a lack of local support and ineffectual enforcement by state officials.
After 1922, however, in a phenomenon unique to North Carolina, incidents of lynching inexplicably and rapidly declined, prompting the state to head a national movement1to end it. Appendices provide an account of all 168 known lynching occurrences.

Vann R. Newkirk currently serves as Academic Dean at Andrew College in Cuthbert, Georgia. He has extensively researched the development of the NAACP in North Carolina and the subject of crime and punishment in general and has served as an educational consultant for colleges across the South.

"Expand[s] our understanding of the evolution of lynching and will serve well for classroom use." --The Journal of Southern History

Book Description Hardcover. Condition: GOOD. Spine creases, wear to binding and pages from reading. May contain limited notes, underlining or highlighting that does affect the text. Possible ex library copy, will have the markings and stickers associated from the library. Accessories such as CD, codes, toys, may not be included. Seller Inventory # 3482474249

Book Description Hardcover. Condition: Very Good. No Jacket. Minor shelf and handling wear, overall a clean solid copy with minimal signs of use. The binding suffers minor loosening due to age and wear, but remains secure and in-tact; the pages are clean and unmarked. Secure packaging for safe delivery. Seller Inventory # 1232632484

Book Description Hardcover. Condition: Very Good. Item is in very good condition. If supplemental codes/CDs for textbooks are required please contact us prior to purchasing as they may be missing. Photos are stock pictures and not of the actual item. Seller Inventory # DS-0786439289-2