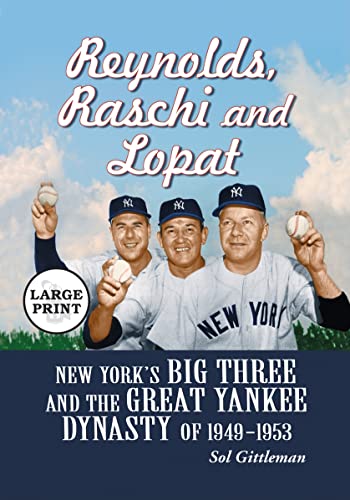 When the 1949-1953 New York Yankees won an astounding five consecutive World Series, they did it without the offensive firepower that characterized so many of their championship teams before and after. The franchise came to rely instead on three aging pitchers, an unlikely trio that won 255 games during the five-year championship run. This book focuses on the close relationship and quiet achievement of Allie Reynolds, Vic Raschi and Eddie Lopat. Soon after Robinson and the cross-town Dodgers had publicly confronted the issues of race and ethnicity, these men from very different backgrounds--Creek Indian, Italian and Polish--established a deep communion with each other, became lifelong friends, and over a handful of years re-wrote baseball history. This entry refers to the LARGE PRINT edition.

"Every now and then there's a baseball book that addresses a monumental question which has somehow gone unanswered. If you've wondered, as I have, why the 1949-53 Yankees were the only team in baseball history to win five straight World Series...Reynolds, Raschi and Lopat will give you the answer...a terrific book" --Wall Street Journal

BR> "here's a baseball book all lovers of the sport will appreciate" --CapeCodTimes.com