Music of the British Isles for Banjo (Mel Bay Presents) 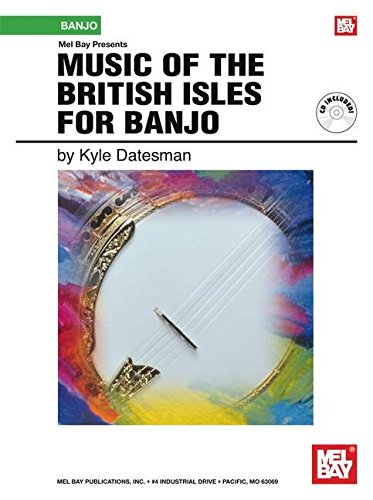 A treasure trove of Anglo-Celtic music adapted to the 5-string banjo. Music of the British Isles for Banjo provides material for banjo players to expand beyond the confines of the key of G major playing in different keys while retaining G major tuning. There is a section where each tune is arranged in more than one key either in tow or three different keys. It teaches the student not to rely on the 5th string while providing fresh insight into the uses of the 5th string capo. Also exposes the player to ancient modal scales as well as the more modern Major/Minor scales. All tunes are presented in the perpetual motion so they may be viewed as limbering-up exercises for the fingers. On the accompanying CD the tunes are played much slower than normal in order for the student to better grasp the material. In tablature only.

Kyle Datesman Kyle R. Datesman has been playing banjo for over 30 years. After being thoroughly enchanted by the music of lutenist Jan Akkerman he gradually became obsessed with Renaissance lute music. He purchased a lute and tuned it similar to a 5 string banjo, thus making the "connection." During the 1980s, he arranged hundreds upon hundreds of Renaissance, Baroque, Classical, and Celtic pieces for the banjo. He performs at restaurants, Renaissance Faires, weddings, etc. - most anywhere where there is a coin to be caught. Mr. Datesman holds a Master s degree in Comparative World History from East Stroudsburg University. The 1970s saw him concentrating on the History of Music where in the 1980s he did extensive research into the History of Early Firearms which has become his forte. In the 1990s he was studying first the History of Philosophy and then the Philosophy of History. He does special exhibits, on the "History of Early Firearms 1320s-1700", for museums, universities, historic sites, etc. The exhibits are comprised of reconstructions which he has built, some from the sketches of Leonardo da Vinci. During 1993 and 1994 he built what some believe to be the world s first, first bicycle, from a da Vinci manuscript which coincidentally is dated to the years 1493 or 1494. His collection was on exhibit in 1992 at the Smithsonian Institute. It was in conjunction with the "Imperial Austria: Art, Arms, and Armor from the state of Styria" exhibit, which is the largest arms and armor collection in the world. It was the first time it was on exhibit outside of Europe. Spending much of his time moving mountains and wrestling rivers, he subsists in a "hobgoblin's hut" on the banks of Pocono Creek in the beautiful Pocono mountains of Pennsylvania. Does not do well in captivity.

1. Mel Bay presents Music of the British Isles for Banjo