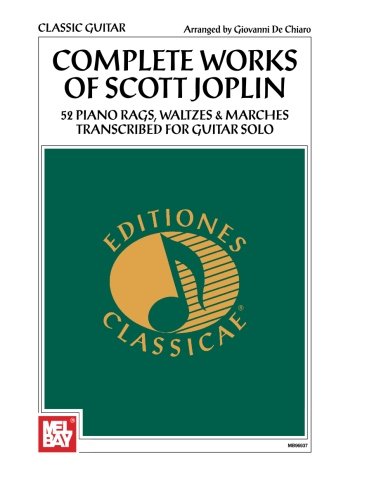 The piano rag is musical form unlike any other. Although melodious, ragtime's excitement and appeal derives from its syncopated rhythms. Ragtime music achieved notoriety through its greatest composer, Scott Joplin (1868-1917). At an early age he studied with an old German musician who introduced him to the piano and music theory. While still in his early teens he earned his way playing piano in the honky-tonks of villages and towns in the Mississippi Valley. He was intrigued with the folk music of his people and the piano style of the self-taught pianists with whom he worked. Take a musical journey through Scott Joplin's prolific career and perform these time-honored ragtime piano pieces as they are transcribed here for solo guitar. Written in standard notation only with fingerings and historical/ performance notes.

American classical guitarist Giovanni de Chiaro made his New York debut in 1976 in a Carnegie Hall performance which brought a rave notice from the New York Times and launched a career of growing distinction. He has concertized throughout the United States, Mexico and Europe and has performed for Pope John Paul II at the Vatican in Rome. He was invited to perform for President Clinton at a special Christmas function at the White House. His recordings include his arrangements of Christmas carols, Broadway classics, and the complete works of Scott Joplin. In 1989, Mr. De Chirao received a commission from NASA to compose an original guitar composition for the Space Shuttle program. The editors of the prestigious national journal Musical America named Giovanni de Chiaro as one of the magazine's Young Artists of the Year in 1982. He is a contributing editor to guitar magazines published in both the United States and abroad. Giovanni has recorded two nationally televised special programs for the PBS network. Both of these programs received Gold Awards and top honors at several film festivals. His many recordings can be heard throughout the United States on National Public Radio. De Chiao is currently the professor of guitar at the University of Southern Mississippi in Hattiesburg, Mississippi.