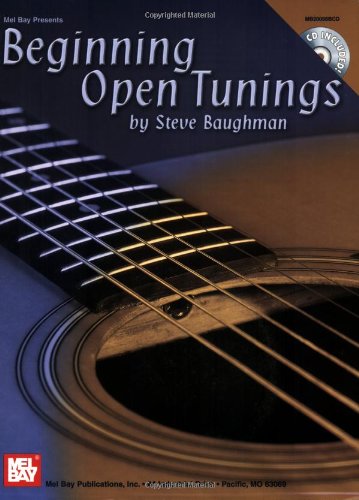 This book is devoted to introducing guitarists to the basics of playing in alternate tunings. This book provides an in-depth look at four popular tunings, Open C, Open G, DADGAD and Orkney Tuning. Chord charts are provided for each tuning, along with tab and notation for blues and textural riffs, song arrangements, and exercises for using the tunings as vocal accompaniment; a valuable tool for demystifying this exciting way of playing guitar. Companion CD included.

An American born and raised in Southeast Asia, Steve Baughman spent his childhood in the Malaysian city of Kuala Lumpur. The '60's were "in" and folk music was big, even in Southeast Asia. Like many kids of that era, he fell in love with the guitar. One day while rummaging through a part music, part bicycle shop near a Chinese fruit market, he found a dusty, probably pirated copy of Mel Bay's classic guitar method book. With that book he began the most enriching journey of his life.

Steve now makes his home in San Francisco. He derives his musical style primarily from British Isles fiddlers, most significantly Martin Hayes. His album A Drop of the Pure features his extremely rhythmic and lyrical arrangements, and showcases his unique touch on the guitar.