Items related to Album of Pieces for Solo Guitar

Album of Pieces for Solo Guitar 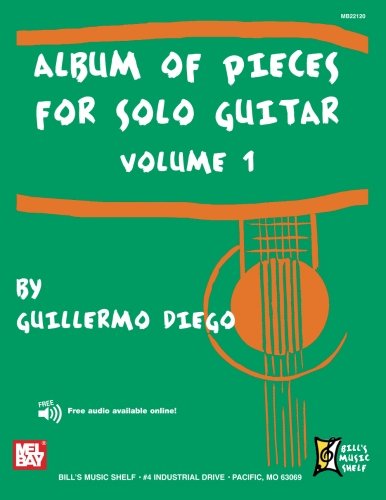 Guillermo Diego´s Album Pieces for Solo Guitar Volume I, embody a collection of original works conceived by this recognized Mexican composer for classical guitar. These pieces have being written with different musical languages that goes from the inspiration in Mexican styles to free pieces that use contemporary and different resources that belongs to the guitar concerto style. This works are plenty of musical colors and offers different challenges to the guitarist. The writing is completely idiomatic, very natural for the guitar; it is music in which one the professional finds an artistic meaning but also, the students will find the elements to improve his technical and will near them to original works that have being composed recently and inspired in Mexican and Latin American music. The publication of this book is a premiere and will give to the guitarist part of the knowledge of what it is happen currently in Mexican classical guitar. Guillermo Diego is a well-known composer into the sphere of classical guitar who has being recognized for his contributions to the art of the guitar.

The catalogue of this Mexican composer and guitarist includes music for solo guitar, orchestral works and chamber music. International masters of the guitar and several orchestras have performed his works. He has been resident composer at The Banff Centre for the Arts in Alberta, Canada and Centrum at Seattle, USA; in addition, he has being granted by USA Rockefeller Foundation and The Mexican National Council for the Arts. In 2006 Guillermo Diego received and homage at Caroso Festival in Italy. He is an artist of URTEXT DIGITAL RECORDS. His concerto for guitar Cuban Landscape with Brouwer was premiered at Fine Arts Palace of Mexico and recorded by Quindecim Records. He has researched on Mexican and Latin American music using these inspirations as an essential way in his compositions. He has being invited to many international guitar festivals; among other countries, his compositions have being played in Italy, France, Greece, Belgium, Germany, USA, Canada, Brazil and Mexico.

1. Album of Pieces for Solo Guitar: 1

Shipping: US$ 11.20
From United Kingdom to U.S.A.
Destination, rates & speeds