Items related to High Treason: The Assassination of JFK and the Case...

High Treason: The Assassination of JFK and the Case for Conspiracy 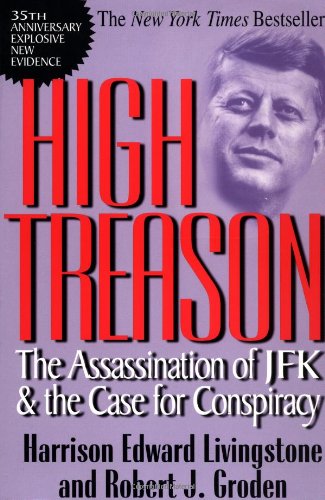 Originally published in 1980, High Treason remains one of the touchstone texts for many who are unconvinced that Lee Harvey Oswald acted alone in the 1963 assassination of John F. Kennedy. "Too many people have too much at stake to allow the truth to come out," cautions Livingstone, "even though it has been squeezed out drop by drop over the years. The cover-up is kept in place to this day by those with interests that are threatened by the truth of a political assassination."

Among the provocative conclusions that Livingstone reached, and which he expands in this revised edition, is that "all of the evidence, including the famous Zapruder film, was fake," deliberately altered to conceal direct proof of multiple gunmen. He enlists several people, including eyewitnesses to the autopsy, to go on record in order to support this allegation, and also documents the "strange deaths" of numerous people who he believes are related one way or another to the cover-up. Although there are some occasional lurid turns of phrase, High Treason is for the most part one of the calmer, more levelheaded examinations of JFK's death.

1. High Treason: The Assassination of JFK and the Case for Conspiracy

2. High Treason: The Assassination of JFK & the Case for Conspiracy (Carroll & Graf)