Items related to Voltaire in Love 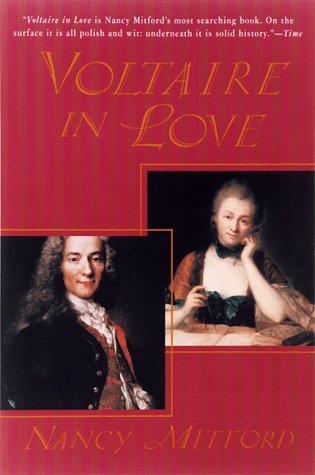 In 1733, the lovely, intelligent, and married Marquise du Châtelet commenced her romance with one François-Marie Arouet, a philosophe who had made a name for himself as "Voltaire." Mitford deftly and engagingly recounts their exemplary affair, whether in studious exile in the country, on the run from the censor, or in the "thoughtless circles of high society." Her portrayals of the "scamp" philosopher, his mistress who was "excessive in everything," and their "irregular century" are delightful portraits in themselves and as a group, a fascinating fresco of the French Enlightenment.

Nancy Mitford was born in London on November 28 1904, daughter of the second Baron Redesdale, and the eldest of six girls. Her sisters included Lady Diana Mosley; Deborah, Duchess of Devonshire and Jessica, who immortalised the Mitford family in her autobiography Hons and Rebels. The Mitford sisters came of age during the Roaring Twenties and wartime in London, and were well known for their beauty, upper-class bohemianism or political allegiances. Nancy contributed columns to The Lady and the Sunday Times, as well as writing a series of popular novels including The Pursuit of Love and Love in a Cold Climate, which detailed the high-society affairs of the six Radlett sisters. While working in London during the Blitz, Nancy met and fell in love with Gaston Palewski, General de Gaulle's chief of staff, and eventually moved to Paris to be near him. In the 1950s she began writing historical biographies - her life of Louis XIV, The Sun King, became an international bestseller. Nancy completed her last book, Frederick the Great, before she died of Hodgkin's disease on 30 June 1973.

"Mitford writes with a profound sympathy for the 17th and 18th century, and Voltaire in Love caps her career as the nonpareil popular biographer of that era" * Washington Post * "One of the most blissfully entertaining books in our language" * New Yorker * "Nancy Mitford softened the image of the leader of the French Enlightenment with a witty little book called Voltaire in Love. Mitford took pleasure in showing that the celebrated reformer was much more than a desiccated brainbox" * Independent *